They’re not going to adopt from shelters or rescue groups, and that’s a direct failure on behalf of these organizations.

Animal shelters must adopt out dogs and cats over the holidays. They must encourage dogs and puppies as gifts. They must promote the idea of the Christmas puppy.

Why do some rescue groups refuse to offer holiday adoptions? 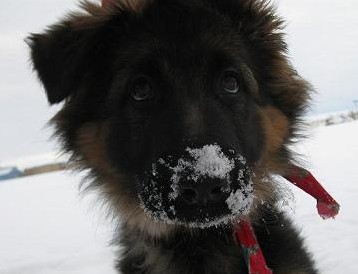 Rescue groups obviously want the dogs to go to good homes, and they often have an irrational fear that dogs adopted out as Christmas gifts will just end up back in the shelter system.

Really though, there is no evidence to support the myth that dogs given as Christmas gifts are more likely to be returned. The opposite is actually true.

I love the idea of the Christmas puppy.

While the holidays might not be the right time for some of us to adopt a new pet, it’s actually the perfect time for others.

The kids are home from school to help out. Adults are often able to take off a few extra days from work. For some of us, the world seems to slow down from about Dec. 23 to Jan. 1. It’s a time to catch up. Spend time with family. Sleep in. Relax.

OK. If you’re adopting a new dog you might not be doing much sleeping in or relaxing, but you know what I mean. Around the holidays, many of us are able to “check out” from some of our other obligations for a while. We can focus more on family and on a new pet.

There are a few rescue groups out there that remain confused. They believe if a meme gets 1,000 Facebook shares it becomes a fact.

The following are some myths you may hear this season, and what you can politely tell someone in response to such myths.

Well, it depends on who you are. Let’s remember that much of the world does not even celebrate Christmas. It’s just another day. For others, the holidays are a time when it’s easier to take time off from work and help a new dog settle in to the family’s routine. Others may receive a Christmas bonus from an employer and may want to use the money to purchase pet supplies.

Myth #2: “Dogs should never be given as gifts.”

I can’t think of very many gifts that would be better than a dog. It’s just a matter of giving the gift responsibly. For example, perhaps you pay the adoption fee for your daughter’s dog but then she is the one to pick the dog out. Or maybe you give your husband a puppy, but you let him know in advance so he can be involved in the selection and preparation process.

Myth #3: “Holiday puppies will end up in shelters.”

The National Council on Pet Population Study and Policy did a study on what “breaks the human-animal bond” [1] and causes people to surrender their pets to shelters. “Received pet as a surprise gift” was not listed among the top reasons people gave up their pets.

According to its 2009 study “Exploring the Surplus Cat and Dog Problem”:

That doesn’t surprise me. Most of us know someone who has received a pet as a gift and in fact loved that pet very much. I received my cat Scout as a free surprise gift from a friend and my life has revolved around him ever since. I love my cat with all my heart.

The study listed the following as the top 10 reasons people surrendered their dogs to shelters:

6. Too many pets in home

10. No homes for littermates

It’s safe to assume most people love their pets and want to keep them. Giving up a pet is a difficult, emotional decision – one that is not as black and white as some rescue groups would like us to think.

The Nevada Humane Society is offering reduced adoption fees from now through Jan. 1 as part of a national event called Home 4 the Holidays, according to a press release. Adult cats are free, and dogs are just $50.

Thousands of shelters are participating in Home 4 the Holidays nationwide, according to the press release. The event was created to get dogs and cats out of shelters and into loving homes during the season of giving.

“More families bring pets into their homes during the holidays than any other time of year,” according to the Helen Woodward Animal Center’s web site. The center organized the original event in 1999 [2].

“In the past, some shelters have actually gone so far as to discourage families from adopting pets during the holidays,” according to the center’s web site. “This did not stop families from getting new pets. It just took away the adoption option and forced them to support the pet store and puppy mill industry.”

Now I want to hear from you. Have you ever adopted a pet during the holiday season?