Home » Column: Are you ready to define ‘adoptable’?

It’s easy for a shelter to save every adoptable animal if it has very low standards for what it considers “adoptable.”

In most areas, there is no legal definition of “adoptable,” and shelters are basically free to do as they please.

A sad example is the City of Odessa, Texas.

The Odessa Animal Control killed 5,442 impounded animals in the first 10 months of 2013, according to the Odessa American newspaper. The City’s animal control considered just 353 of those animals adoptable, about 6 percent. Meaning, the remaining 94 percent of the animals killed were “unadoptable.”

Obviously this is unacceptable, and heartbreaking. I hope Odessa can find a way to make some major improvements.

But this is why we need to be skeptical of pounds and shelters if they say they are saving “every adoptable animal.” It’s why we need to ask for the numbers to back up such claims.

Last week I wrote about the community of Fargo, N.D., and how Fargo saved every adoptable, impounded pet in 2013, according to the Humane Society Fargo-Moorhead.

Saving “every adoptable animal” isn’t good enough. What matters is the percentage of impounded animals that walked out the front door alive.

In Fargo’s case, the three local pounds had a live release rate of 91 percent for dogs and cats combined in 2013, according to the statistics compiled by the humane society. (1,810 impounded and 1,655 released alive.)

Sure, Fargo is far from perfect. I’m careful not to call it a no-kill city because it’s still killing nearly all impounded feral cats, for example. My heart goes out to those cats.

But you know what? I’d say saving 91 percent of all impounded dogs and cats would be a success for any community no matter what your definition of adoptable is.

And how can you be sure about your own local shelter or your own community’s claims?

Ask for the numbers.

How are your local pounds and shelters doing? 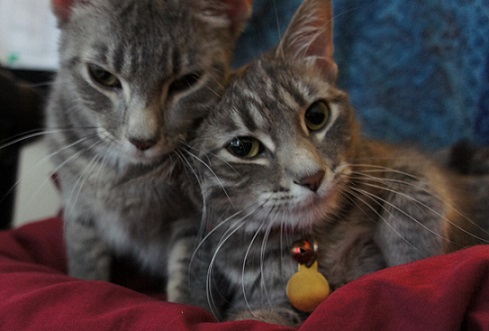 These two cuties were pulled from a Fargo-area pound in 2012. They were fostered by me and adopted by friends of mine.

Lindsay Stordahl is the blogger behind ThatMutt.com and writes a column here every Wednesday. She supports the movement to end the killing of impounded, adoptable animals in worldwide shelters. If you have a topic suggestion for Lindsay, you can reach her at Lindsay@ThatMutt.com.

oh my. Those first numbers broke my heart. I don't know how shelters work, if someone can sue a shelter over a dog. I know Indianapolis Animal Care and Control will not put a dog on the adoption floor if they so much as flinch during the food bowl test. They become "rescue only" dogs. I own two dogs who resource guard food, both rescues. I know plenty of people who are fine to confine a dog to crate, and leave it to eat in peace. It is so frustrating, plenty of otherwise very nice dogs being deemed "unadoptable"

Ace does a small amount of resource guarding as well. He growls when certain dogs approach his bowl.

Definitely hard numbers to work with. I agree it's harder to place some types of dogs into homes because of all the restrictions placed by landlords. It does limit the number of people who can adopt. So glad to hear the people there are compassionate and hardworking.

Have you ever visited Chicago Animal Care and Control? They take in 20-30 dogs a day, mostly pit bulls, and many of them are challenging animals(because of where they came from) no matter how you define adoptable. On a good Saturday they have 4-5 dogs adopted. Those are hard numbers to work with. Though I have to say my experience showed CCAC has the nicest people to interact by far compared to other Chicago offices I've interacted with, and that's working under tough conditions. They have a much tougher time finding volunteers to come there because it's not all happy stuff going on there, not all the dogs get adopted. There aren't pit bull rescues aplenty taking 20-30 dogs off there hands every day. The volunteers I did meet there were amazing people, one a retired doctor who puts in 7-8 hours 7 days a week. She does as much as she can for CCAC and the dogs that go through there. I'm not sure what CCAC numbers are but I would guess similar to Odessa's. I couldn't judge CCAC after visiting, after seeing the most dedicated people in animal care, both employed and volunteer. From my viewpoint the problem mainly lies from irresponsible owners and not enough people who want to adopt shelter dogs. No surprise. There's a good 30+ dogs ready for adoption, including all the vet work the rest of the shelters have for a measly $65. Who will adopt them all? Sadly, most won't get adopted.