My male dog is a toy-obsessed, retrieving fool.

Years ago, I learned in order to live with Ace I would have to set some rules.

I only throw the ball a couple of times in a row, for example. I use the command “that’s enough” to signal play is over.

And I know I’m not alone.

Some are obsessed with retrieving and constantly drop toys at their owners’ feet. Others are obsessed with carrying toys around, and some become possessive of toys and will guard them from other dogs or from people.

I believe the majority of these behaviors are linked to high-energy dogs in need of more structure, exercise and training. This is just my opinion, and I’d like to hear yours in the comments.

However, there are some cases where a female dog will guard her toy like it’s a puppy because she is going through a false pregnancy.

When I wrote a post about whether or not dogs think their toys are babies, several people shared examples of their dogs experiencing false pregnancies. In those cases, the female dogs were “nesting” with their toys, licking them and sometimes guarding them as though the toys were puppies.

Below, you’ll see my neutered, male dog Ace when he was going through his false pregnancy.

But jokes aside, some dogs really do have to deal with false pregnancies. 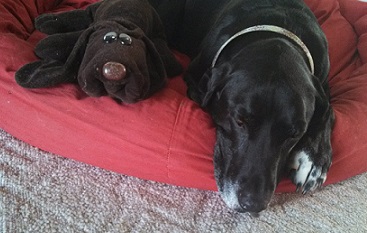 A false pregnancy in a dog is when a non-pregnant female dog shows signs of pregnancy, according to PetMD.com [1]. These symptoms are typically 4 to 8 weeks after her heat is over.

Most intact females will show some signs of false pregnancy at some point, according to VCAHospitals.com [2]. Although, the symptoms do not necessarily happen after every heat.

Symptoms of a dog’s false pregnancy

According to PetMD.com, a dog going through a false pregnancy could have behavioral or physical symptoms such as:

Why do false pregnancies occur?

A hormonal imbalance is most likely the cause of false pregnancies in dogs, according to PetMD.com.

After a heat cycle, the female dog’s ovaries will produce hormones, regardless of whether or not she is pregnant, according to VCAHospitals.com. It remains a mystery why these hormonal changes occur even in non-pregnant dogs. If she is pregnant, the hormones will continue to be produced until right before she gives birth. If she is not pregnant, hormone levels begin to decline again after four to six weeks.

Can spayed dogs have false pregnancies? 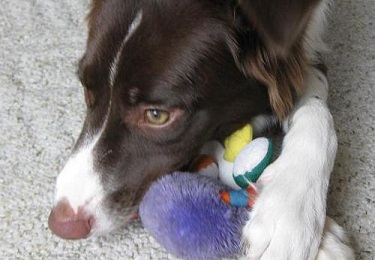 False pregnancies can occur in spayed dogs (a spayed dog’s ovaries and uterus have been removed), but it’s not as common, according to VCAHospitals.com. A false pregnancy in a spayed dog is most likely to happen a few days after a spay surgery.

What should you do if your dog is going through a false pregnancy?

Personally, I wouldn’t worry about it too much unless your dog seems to be very uncomfortable or if the symptoms do not seem to pass. If that is the case, I would contact your dog’s vet.

Several people have left comments on my other post saying they think their dog “wants to be a mom” due to the guarding behavior (guarding stuffed toys as though they are puppies).

I can’t speak for dogs, but I don’t think any dog actually wants to be a mom. I believe they are simply acting out their maternal instincts. Meaning, don’t breed your dog just because you think she wants to be a mom (dur-de-dur)! I am not against dog breeding, but come on.

Should you have your dog spayed?

This is a personal decision. Most people in the United States choose to have their female dogs spayed so they do not have to deal with the mess of their dogs going into heat. Spaying a dog does have its health risks, though, and I encourage you to read my post on the pros and cons of spaying and neutering.

Does your dog guard her toy like it’s a puppy?

How can you tell the difference between false pregnancy and pyometra? My dog does not have a fever and is displaying all the signs of false pregnancy ( no aggression though) but she is licking herself a lot and all of my googling has left me worried that it could be pyometra. She is not distended though and no fever. Her teats are expressing milk. I am avoiding stimulating them but since they were swollen, I wanted to check. Any help would be appreciated. I have a vet appointment for her on Monday. It's Saturday pm now.

My female Rottweiler Cheyanne apparently is going through a false pregnancy she is 3yrs old and has been in heat 4 times now and this is the first time she has did this her baby is a purple one eyed squeaky toy. We were not sure what was wrong with her till I read your blog. She is fine with me around her, but if my female Great Dane gets around her she growls at her. I feel bad for her. I hope it does not last much longer she stays in my sons room will not even come out to eat or go outside to use the bathroom (she's not using the bathroom at all) can not get her to move unless u bring her "baby" out of the room and when she gets it back she takes it right back to the room and lays with it licking and smelling it. I hope my baby is back to normal soon.

My black 3yrs old lab just started 1 week ago. She guards it zeoulsy. Its a rubber squeeze toy wit that makes squeaky sound. Definitely going thru false pregnancy behaviour. Looking at her is funny and sad at the same time..

I have a 11 year old dachshund. This is probably the third time she I having false pregnancy. She isn't very active and doesn't eat and seems to be depressed all the time. Very rarely you will find her playing with us. She is always finding a place to hide. We have tried to breed her but it didn't work out because she doesn't like male dogs. I don't know why. Will it help if i bring home a puppy for her? I have bought home my friends puppy before. It was a few months old. And she didn't show any hatred towards him. I really want her to be happy and she would want to be a mom. What do u think?

One of my two small female dogs (the one that has not yet been spayed) has all of the signs and symptoms of a false or pseudo pregnancy including enlarged mammary glands, loss of appetite, anxiously trotting around the house with a rubber squeaky toy in her mouth, "nesting" behavior and aggression. She was in my bedroom yesterday lying in my other dog's bed which she has recently taken over for the purpose of stashing and guarding several stuffed and squeaky toys. She refused to get out of the bed to eat, so I took the food to her and let her eat in the doggie bed. When I went back in to get the dish, my other little dog followed me and we were met with some pretty aggressive growls. I took the other dog into the living room and pulled out a basket of toys and invited her to get a "baby" to play with. The other dog ran into the living room to the basket of toys. She growled and I corrected her (firm "no no"). She growled again and I repeated the correction and told her to go lay down, and she immediately viciously attacked my other little dog. I seriously thought she was a little "psycho" dog until I read about pseudo pregnancy. My question is: Do pregnant females nest with toys and get aggressive before there are actually any pups to protect or are these symptoms exclusive to a pseudo pregnancy? Thanks for any insight you can offer.