“She’s so cute, she carries that toy around like it’s her puppy.”

“I know, she even growls when I try to take it. So cute!”

“Aww … she’s protecting it. If I try to put it away, she sits and cries for her baby. Haha!”

Have you ever caught yourself saying something like this? I made up the above conversation, but I hear similar comments all the time.

I’ve even encouraged my own dog to carry a stuffed toy around because I think it’s cute. But that’s the problem. We think it’s cute when really it’s unhealthy for a dog to obsess over a toy.

Does my dog think her toy is her baby?

Dogs know their toys are not real.

Chances are, your dog does not think her toy is her baby. When a dog carries her toy around all day, it is most likely because she is obsessive or possessive about the toy.

She does not think it is real. She knows it’s not her puppy, unless it’s a rare instance where the female dog is having a false pregnancy. Most of the time, though, it’s us humans who create emotional attachments to stuffed animals. Dogs know better.

My dog is attached to a stuffed animal

A dog with pent-up energy easily takes that frustration and fixates on a toy or several toys. If the dog is not given exercise, mental challenges or rules on a daily basis, the obsession on the toy grows because she has no other outlet for her energy.

We humans think it’s cute to see our dogs obsess over a toy so we even encourage the behavior. We say things over and over in an excited voice like, “Where’s your puppy?” Or, “Where’s your ball?” And then we overdo the praise and attention.

We reward the obsessive behavior without even realizing it.

*If you like this article, we’d love to send you other helpful training tips in our weekly newsletter. Click Here.

Obsessing over a toy can lead to aggression.

If your dog growls when you try to take her toy away, it’s not cute.

I see owners of small breeds like Chihuahuas encouraging their dogs to growl because they think it’s funny. Encouraging aggressive behavior in a dog is never funny.

A five-pound dog can bite someone pretty badly, especially a child who has her face up to the dog.

Even when a rottweiler growls as someone tries to take her toy, it’s easy to overlook the behavior if the dog is gentle in all other situations.

The only time my old golden retriever growled at me was when I tried to take her rawhide bone away. Since I knew she would never hurt anyone, I didn’t take her growling too seriously.

But even she would snap if I tried to take her bone. This was a behavior I should not have put up with, but I didn’t know better at the time.

Why is my dog carrying a toy and whining like it’s her baby?

There could be several reasons why your dog is carrying her toy around and whining. Usually it’s one of three reasons:

1.) She might simply be excited and wants you to play with her! She might want you to try to chase her or play “keep away” or tug. This particular toy might be one of her favorites and she is just so excited to play with it!

2.) Your dog might want you to let her outside so she can go burry the toy in the yard (like she might do with a bone). This toy might be seen as high value to your dog, and she wants to go out and bury it or hide it so no one else can steal it. She might also pace around the house as though she’s looking for a place to hide it from you or from your other dogs.

3.) A third option is that your dog might have some possessiveness issues with this particular toy. (More on that below.)

Of course, just because a dog loves a certain toy doesn’t mean she has issues. Just learn what the difference is between a normal dog playing and a dog that is starting to become possessive of the toy.

Signs of toy possessiveness to watch for:

Does your dog seem to think her toy is her baby?

Let me know in the comments. My dog Ace used to be pretty obsessive with tennis balls. He’s gotten less obsessive in his old age! (2019 update: Ace has passed away.)

My young dog Remy can get in a very fixated/possessive state of mind over stuffed toys so we are careful not to let his excitement escalate.

*If you like this article, we’d love to send you other helpful training tips in our weekly newsletter. Click Here.

How to break a dog’s possessiveness

Why does my dog want me to hold his bone? 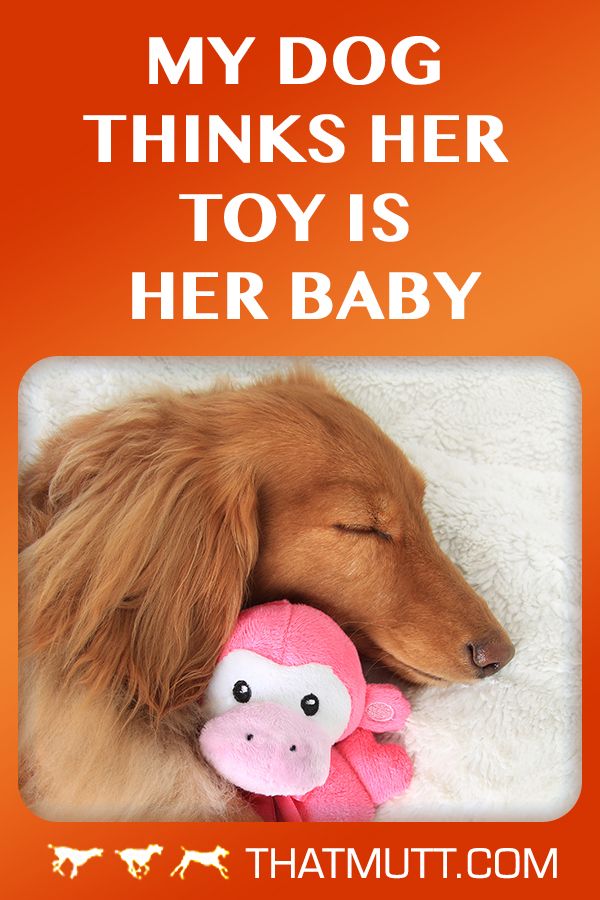 121 thoughts on “My dog thinks her toy is her baby”