Home » My dog is scared, so he must’ve been abused

In the fall we have a lot of houseflies in our area, something that is out of the ordinary for any other time of year.

We don’t have a fly swatter, so I grabbed a magazine and was—WHACK!—killing the flies, or at least trying.

Meanwhile, my dog Ace tucked his tail and head low and ran to the corner of the room where he lied down and cowered.

“Ace!” I said in my happy voice (some might say I was rewarding my dog’s fear). “It’s OK, boy!” Then I got out his ball and played with him a bit. 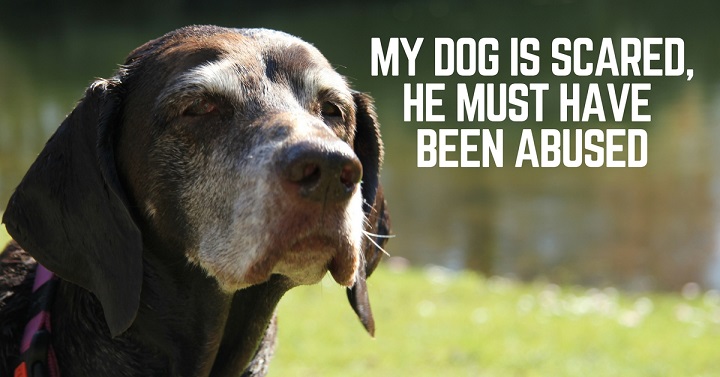 My dog apparently doesn’t like the sound of a magazine hitting the couch or the floor or the wall.

Does he dislike the sound?

Does he think I’m mad?

Does he think I’m going to hit him?

Did someone hit him with a magazine or rolled-up newspaper at some point? (unlikely)

Some dog owners might jump to the conclusion that my dog must’ve been hit at some point with a magazine or rolled-up newspaper.

As another example, if a dog is scared of someone holding a broom, it might be easy to assume the dog was hit with a broom.

In reality, I know my dog is most likely just sensitive to the sound of the magazine.

There’s very little that actually scares Ace, but he is very sensitive to my tone of voice and my mood. He doesn’t like to be around me when I’m stressed and crabby (who would?). 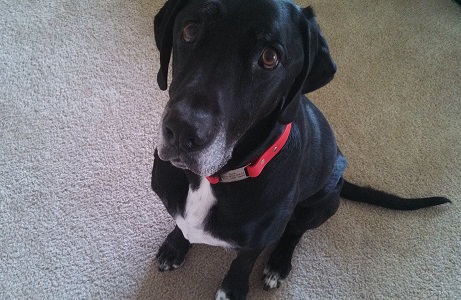 He’s the type of dog that acts heartbroken if you tell him “no.” He always wants to do the “right” thing. He might’ve thought I was upset when I was trying to catch those flies.

Dawn Ross maintains a blog called American Dog Blog, and she wrote a good post recently on this very topic. She wrote how her dog Pierson can be shy when meeting new people.

While that could mean Pierson was mistreated, more than likely he is just shy due to his specific breed mix or possibly a lack of socialization, Dawn wrote.

As another example, Ace used to get really stressed when my husband Josh would yell during Vikings football games. Ace would run upstairs to hide, seemingly thinking he was in trouble. (I don’t know what he was really thinking.)

But Ace’s actions make sense, considering he grew up in a house with two women and no men. These women may have been sports fans who yelled a lot (I don’t know), but they probably didn’t yell and swear quite like my husband does when the Minnesota Vikings are losing.

Today, Ace is not fazed by this kind of sports drama. He even joins in on the excitement (or disappointment), wagging his tail and looking for a toy to present to us, probably to get us to stop watching TV and to play a real sport, like fetch.

A dog’s past is often unknown

Many people know very little about their dogs’ pasts, but I am fortunate to know my dog Ace has never been abused.

I saw where he lived before I adopted him. I met his previous owner, and while she didn’t train him, she cared about him and wanted the best. She hardly disciplined him at all—that was obvious. He didn’t even know the word “sit.”

I suppose it’s possible she scolded him with a rolled-up newspaper at some point, but it seems unlikely. Even if she had, I wouldn’t consider it “abuse”—just a dog owner doing what she thought was best at the time. There would be no point to dwell on it now.

Overall, I think we need to be careful about jumping to conclusions when it comes to a dog’s past.

If the dog truly was abused, then yes, that information is helpful to know, but only to help the dog move forward. It’s not a reason to hold a dog back or to feel sorry for him over the longterm.

And if he’s just shy, sensitive or needs more socialization, then you know to gradually introduce him to new things in a positive way.

Does your dog ever act fearful of random situations? What does he seem to be scared of and how did you help him? 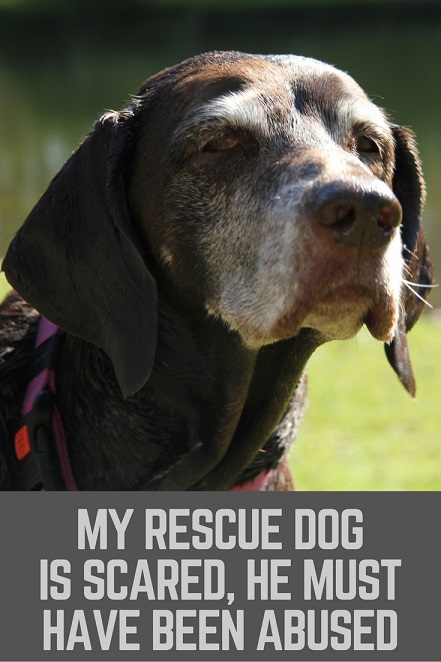 I have a 22 months old Lab, he is scared of loud sounds, pigeons, people staring him in the eye and most of all detest his own kind. He just can not stand another dog, beyond his threshold of 50 meters. We have tried training him, desensitization, making him visit calmer and older dogs..results are NADA! he still hates them. He is a fearful, timid dog outside, always alert and reactive. at home he is a delight, he loves getting cuddled and playing all day long. what can i do to ensure that he learns to trust his surroundings and at least be less anxious. I have had him since he was a puppy, he was weak and sick, he had bad tick fever and it took us good 4 months to rebuild his strength. He has been like this ever since.

when i got champ he was full of fleas. his blood platlets were 10 instead of a normal 48. his ears are always down like he's scared. u go towards him and he rolls over on his back. he's a yorkie. he does strange things like jump up from asleep and walks around in circles or just stands there with his head down. if i give orders he cowers. he hacks alot like maybe he had had a chain around his neck. he gets lumps around his eyes that come and go. he is a very affectionate guy. he is on my lap all the time. he does't want to leave my side. he is my soul mate. does this sound like an abused dog

We just can never know for sure but sounds like he didn't get the best care as far as his health obviously and maybe not socialization.

My boxer Bandit is literally scared about almost everything, loud noises, sudden movements, other strange dogs, he reacts to people walking down the street. He grew up with an older brother who was not like that. We took him to obedience class and although it was a struggle , he mastered most of the commands. He still has trouble with meet and greet. He also pulls and is reactive on leash. I recently purchased a no pull leash and am getting ready to try it. I will probably order the book you mentioned as well. I look forward to your posts.

We have a puppy who balks at getting into the car. Even though the car should represent only good things to him (going to the pet store to let him choose a treat; or going to the dog park) he refuses to get into the car. He sits down and won't move, or tries to backpedal on the leash. No amount of high value treats can get him to get into the car. While our other pup happily jumps in and tries to show him how to do it. We end up lifting him into the car where he promptly goes to sleep. I'd love to figure out what the issue is to help him get past it, since he's already 30 pounds at 3 months, and will probably grow to 70 or 80 pounds.

Great post. People do often jump to conclusions, which is generally not wise. I think there is quite possibly a genetic link as well. Some dogs are born with a certain personality or temperament just like people. It also might depend on how soon they were taken from their mother. We got a golden pup once at six weeks and she was a basket case all her life fear-wise. I am convinced that was part of it, in addition to her genetic make-up of course. I will never take a puppy that young again. Living beings are complex, that's what it boils down to I guess. I'm glad Ace can join in during the Vikings games now!

He also used to be afraid of the referees' whistles on the TV. Not anymore!