Have you nominated your favorite rescue group or shelter for Dog Nation’s Best Friend’s Friend Contest?

The winning group will receive a $500 donation, so it’s worth three minutes of your time to enter. You can do so here.

Nominations are taking place now through Dec. 31, and the voting will begin in January.

Prizes include $500 for the winning organization, $300 for second place and $100 for third place.

As an added incentive, I’m also featuring all of your nominations here on my blog to give your favorite groups some extra attention.

Here are some of those groups you’ve nominated so far:

Unfortunately, there are several high-kill shelters in California, and dogs of all breeds end up in those shelters.

Camp Cocker Rescue was nominated by Patti S. because she is impressed with everything it does for cocker spaniels in need of rescue.

“I very much respect the fact they don’t turn dogs in need of medical treatment away and will do everything they can to appropriately diagnosis and treat dogs with medical issues,” she wrote in a comment on my blog.

Sweet Angie has been waiting a long time for a home, according to the rescue.

“She looks like a cuddly stuffed animal, but she doesn’t like to be handled very much,” the rescue said. She has more of a “working, sports dog personality than a typical, snugly cocker spaniel personality.”

[quote_center]”They are really doing some great work there and need all the help they can get.”[/quote_center]

A recent house fire in Baton Rouge revealed more than two dozen neglected dogs, according to NBC33. Companion Animal Alliance, which serves as the municipal, open-intake shelter for the area, has been caring for the dogs during the investigation.

“Most of them are precious, gentle, well-mannered and adoptable poodles,” one of the organization’s board members told me.

The group was nominated by Jennifer J., who volunteers to foster dogs for the shelter. You may remember her foster dog Amy who is currently up for adoption.

“They are really doing some great work there and need all the help they can get,” she said.

Pictured is a boxer mix named McKinley, up for adoption with CAA.

“He is a super sweet dog, but just hasn’t found the right person yet,” said Lily Yap, foster and rescue coordinator for CAA.

You can read more about McKinley here or visit the shelter’s web site here.

Boxer Butts & Other Mutts rescues dogs from shelters and depends heavily on its network of foster homes, according to its web site.

“Although they are mainly a boxer-specific rescue group, they also pull mutts when in need of being rescued,” said Barbara R., who nominated the group. (She has two adorable boxer mixes herself.)

Barbara said the rescue coordinates several silent auctions throughout the year as a way to raise money for the dogs.

“I love that they don’t just ask for donations, but that they really put an effort into making donating fun and engaging,” she said. 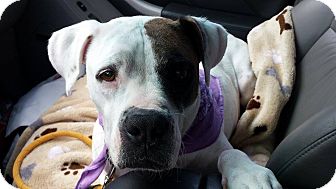 Pictured is a boxer named Femma, up for adoption with BBOM.

“She loves to play with her toys and she gives the best kisses,” according to her profile page. You can learn more about this sweet girl and other dogs on the rescue’s web site here.

DogNation.net is a dog web site owned by Rodney Blow, who is a dog lover and supporter of rescue groups and shelters. He created the Best Friend’s Friend Contest as a way to help some of these groups.

Once you’ve submitted a nomination, leave a comment to let me know and I’ll feature the group in a future post on That Mutt.

Which group will you nominate?

*Note: I received compensation in exchange for writing about Dog Nation’s contest.

Looking for a female pup,1-2years young, that is lovable,obeindent loyal and trainable.For myself a PTSD service dog.

That was fast!!! Could you leave a way to contact you. Give a couple of days to get back to you.

Thank you for featuring all these great rescue groups. Of course, I hope that Companion Animal Alliance wins but any of these rescue groups deserve to win.

Thank you for featuring my favorite rescue group, Boxer Butts & Other Mutts! No matter which rescue ends up winning, pets in need will be helped, and I love that. Thank you so much for writing this post!

I nominated Save-a-Mutt. I love what they're doing to rescue dog moms and their puppies from high kill shelters. They also go through Craigslist listings for people surrendering their dogs to get them into foster care and forever families. These ladies are amazing.

Wonderful! I know you've done a lot to help that group!