Home » How much resource guarding should I allow from my dog?

Most dogs guard something, whether it’s food, a rawhide or a bed.

But should we let them?

There are a lot of articles on my blog about resource guarding and possessiveness and how to stop this behavior in dogs.

But aren’t there some situations where resource guarding is reasonable?

I think it depends on the dog, his personality and his relationship to people and to other pets.

I came up with this topic thanks to your thoughtful comments on my post, Should I correct my dog for growling?

We were all questioning what is and isn’t acceptable as far as “guarding” things like personal space when the dog is tired. 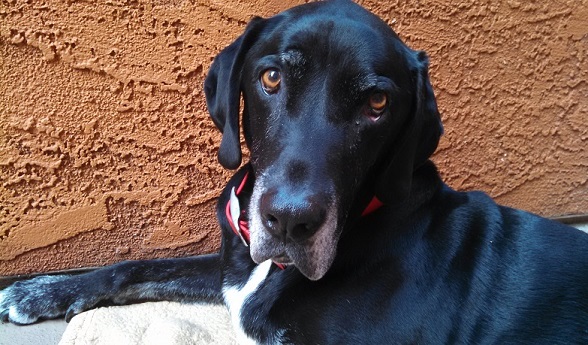 – Is it reasonable for an older dog to growl when he’s eating and another dog tries to take his food?

– Is it OK for a dog to growl when she’s trying to sleep and the cat tries to steal her bed?

– What if a person is petting the dog and another dog comes over for attention, causing the first dog to growl?

I don’t have the answers, but I’m curious how the rest of you would handle these situations. (I’d say the first two are reasonable, not the third.)

Resource guarding between my own pets

I have a dog and two cats, and they are constantly “fighting” over beds, attention and who gets to sit where.

Usually my cat Beamer “wins” by taking what he wants from the other two. He’s actually kind of an asshole, but his behavior is often subtle enough that my husband and I don’t notice.

And my other pets just go along with it.

But every now and then Ace the dog will stand up to Beamer the cat and growl.

And isn’t it justified?

Ace is not really being “possessive” in this scenario. He’s standing up for himself. (So maybe the question is how much bullying to allow from your pets? I don’t know.)

[quote_right]Ace is not really being “possessive” in this scenario. He’s standing up for himself.[/quote_right]I mean, let’s say you’re a dog and you’re trying to sleep on your own dog bed. And then this cat comes over and tries to take your bed even though there are two empty beds available.

Isn’t a growl reasonable? And if he persists, maybe even a snarl?

This scenario happens pretty often at our house, and I don’t know how to respond.

I mostly let my pets work it out, which of course is not a safe option if your pets might get into a real fight and harm one another.

My three have lived together for 8 years, and they pretty much know how to deal with one another.

Here’s how it usually goes down: 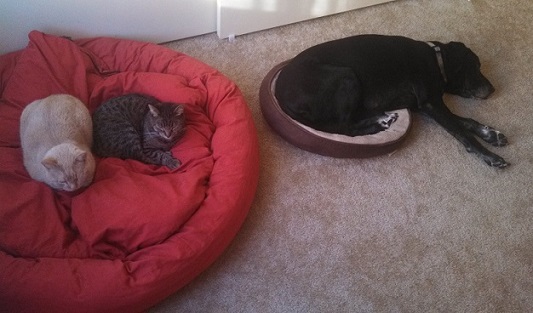 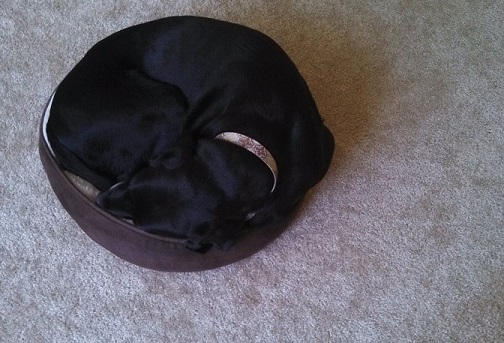 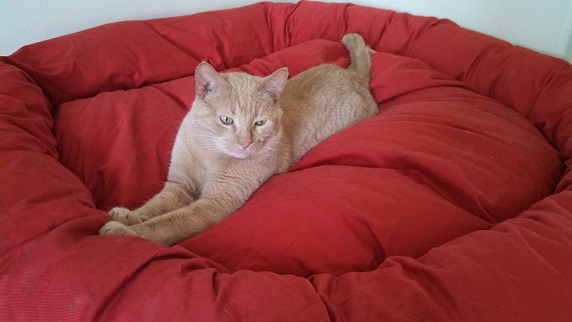 Where I draw the line – guarding items from humans

One thing is clear to me.

Dogs should not be allowed to guard food, toys or space from people.

I’m not saying it’s easy to break a dog’s possessiveness of food or anything else. It’s hard.

But I do think it should be a goal, and if the habit can’t be broken then it at least needs to be managed so no one gets hurt.

I’ve written several posts on stopping a dog’s possessiveness if anyone needs some ideas. They’re all located under one category here.

But now I want to hear from you.

How much resource guarding do you allow between your pets?

Hi Lindsay, this post struck a chord with me. My recent adoptee that I fostered 9 months has issues I believe related to neglect and abuse. I took him on knowing he had a bite history, tho at our rescues boarding house we never saw it. He is kind of the side of my Gemini!

From prior fosters I knew he had bitten when they went to remove a toy, to toss for him. The second foster said he had 3 toys in the bed, and he didn’t need that many. My thought was and she did? Both times were within the first 24 hours.

Initially he had no access to toys, after a few weeks let him hav his first toy. He was still bungeed to furniture, NILIF stage. I have had no toy issue with him as toys were out to play with and he rapidly learned that. He loves playing tug and fetch. I live in a condo so no yard. He doesn’t guard anything from Soph or the cats, I can pick up the food bowls no problem. He sits and waits when I set his food down until I tell him ok.

He has bitten me more then once but I could identify all as fear issues. Takes treats gently, came in great with my service girl Sophie and the cats. I had him on short lead going in as that was unknown, Kizzy met us at the door and kissed him on the nose.

Have had him over a year now, (adopted in March) and behavior that confuses me is very definitely fear issues I think, if petted unexpectedly, will bark and snap. Sometimes taking leash off same thing. Most times he is fine with that tho. Any suggestions guiding him to a better behavior when scared? Would love to change his harness but he spooks things going over his head. Hope I will see your reply.

First-I cackled out loud at the pictures.

Second-Bruce and Faolan are both awful resource guarders of food, from each other and humans. I have tried and tried, but cannot fix it. So I manage it, by feeding in crates, and making them "work" for their food. Great post.

Ha! Glad I could make you laugh! I did think of you and your dogs actually while writing this because I know you said some of them have bad resource guarding issues and you just do your best to manage it. I take it for granted that my pets don't get into actual fights.

That's such a tough situation and question. Laika's resource guarding is the reason I won't adopt another animal while she's around - no matter how much she's improved with humans I don't want to risk it with another pet. Knowing she has those issues would make me uncomfortable with her being unsupervised with other animals at home. It's a shame but it's not something I'm willing to risk.

I told Rebekah I thought of her dogs while writing this, and I also thought of Laika. I enjoyed your post about how she bit you over a toy, not because you were hurt but because you found a way to make it work with her. Resource guarding is such a challenging issue.

Those pictures are hilarious! I'm lucky to have 3 pets who have no boundary issues with each other. If one wants to the other one's spot, he or she will just lie on top of the other one & it turn into a big adorable pile. Norman gets a little nervous when Gina is near his food dish so I put her next to Kaya's when they eat. Gina loves to lick the coconut oil off the edge & Kaya couldn't care less.

When Kaya was younger, she was developing some resource guarding issues with her toys & ball. I worked on her to get a really solid drop & leave it which helped. And when Norman came along I would periodically take her toy or ball & give it to him. He became the perfect training partner for her! Now she loves the game where she nudges dogs to get them to try & get the ball from her, especially Norman. Though I'm careful to keep her from really intense ball dogs just in case.

I'm glad I've never had to deal with real serious guarding issues because it makes me nervous. Though I totally agree with you that it's not okay with humans. We've always had our dogs since puppies so we were able to work with them since they were young with lots of handling & they are super relaxed with any human interactions, basically happy to get attention no matter what they are up to:)

I love your "dog pile" photos. And of course Gina is always snuggled up too!

I'm thankful Ace has no issues with people taking anything from him. I got him when he was a year old, so this has nothing to do with me. I think it's mostly his personality, but his previous owners probably gave him lots of attention when he was little and he grew up around another dog and cat too, which helped him learn to share.

Ace is so cute! And very sweet for putting up with the bed-hogging cats. We only have the one dog and he never guards his stuff from humans. Recently he got jealous and started barking when I was petting my friend's dog though! Luckily he settled down pretty quickly when I told him no, but he wasn't happy about it.