Why Do Dogs Yawn So Much?

Home » Why Do Dogs Yawn So Much?

1. The dog yawns when he feels anxious in the car.

2. The dog yawns as he is anticipating a walk.

3. The dog yawns because he is mildly stressed by another dog licking his face.

4. The dog looks away and yawns when a child takes his toy.

Yawning as a calming signal to other dogs

Yawning is often used as a calming signal in dogs.

Sometimes looking away and yawning is used by one dog to show another dog he means no harm. It can also have a calming effect on the other dog. 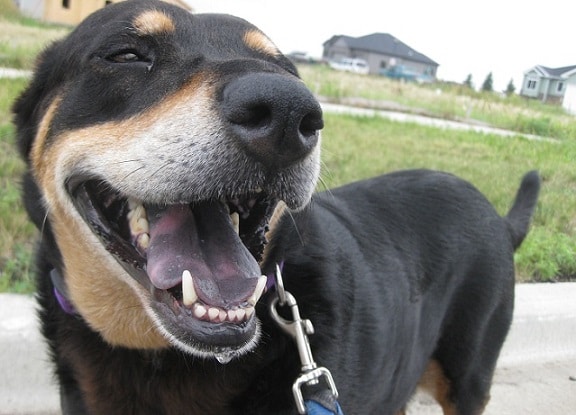 I worked with a trainer at a local humane society who said when she wants to help a dog feel calm she will lean back in her chair, relaxed, and will make a point to display exaggerated yawns. Not loud yawns, but loooong yawns with a wide mouth and without eye contact.

She demonstrated this for a group of us volunteers at the shelter. She was training one of the dogs for adoption, and she showed us how ignoring the dog and making a point to yawn could help the dog calm down.

The dog eventually lied down on a mat in front of her, and she rewarded him with food.

Yawning can be accompanied by other calming signals in dogs such as:

I’m not saying if your dog does these things she is traumatized or living a stressful life.

We all deal with small amounts of stress every day.

People yawn as a ‘calming signal’ too

Since observing dogs, I’ve noticed I will actually yawn for some of the same reasons – as a way to deal with mild stress like awkward silences and as a way to show others I am not “threatened” by their presence.

A good example is when there is awkward silence between myself and another person, say, in the car where I can’t walk away from the discussion.

I notice certain people will yawn very loudly to fill these silences or to avoid confrontation. I notice I do the same.

As another example, if I accidentally trip or bump into something while walking in public, I might do this little fake cough or fake yawn.

I don’t know why I do it other than, I guess, to show that I am “unfazed” by what just happened.

Cats do it too!

My cat Scout will do this dramatic licking display if he accidentally falls off a chair or gets startled.

These are just little things I’ve observed, and I’m not saying I know exactly why any of us (dogs, cats or humans) do these things. But if you look for them, you will see them too. Mostly, I see yawning as a way to cope with mild stress.

Do dogs yawn to get our attention?

Yes, I think some do. 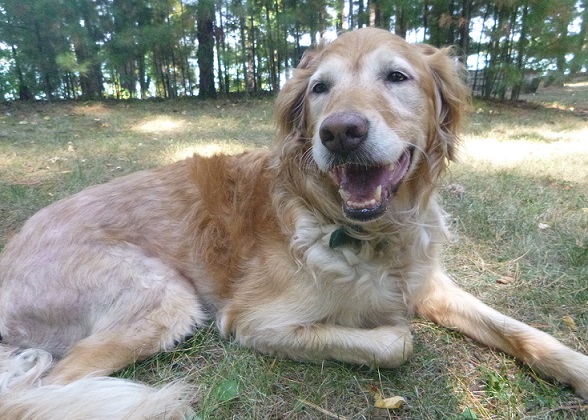 I think yawning starts out as a subtle stress reliever and then it becomes an attention-seeking behavior for some dogs because the behavior gets reinforced by people.

For example, the dog is anticipating a meal, which causes him some amount of stress. He yawns to deal with that stress, and the owner notices this and eventually feeds the dog.

Or, perhaps the same thing happens when the dog wants to go outside.

How many of you know a dog that does these very vocal, dramatic yawns when she wants to eat or play?

I notice my dog Ace yawns very loudly if he sees my husband and I getting ready to head out on a walk together. If we’re both going, the walk must be extra “exciting” and Ace does not want to get left behind.

He definitely knows he can’t get away with barking at us, but I guess he gets away with loud yawning.

I don’t know if he is able to make the conscious choice to yawn or if he just does it automatically. I think most dogs just do the behavior without thinking about it because it’s been reinforced.

Likewise, when I observe people making a similar display – yawning or sighing for attention – I don’t think they quite realize they’re doing it either.

Does your dog yawn a lot? What are some of the reasons why you think he yawns?

Why do dogs shake?

Why do dogs scratch their collars?

Signs a dog is stressed

Pen ALWAYS yawns at me in the morning if I'm taking too long to get up and take her out. It's hilarious! And then she does it again even louder if I dawdle and take 'too long' to put my shoes on/get the harness.

Sade-Mae yawns alot but not for any particular reason..except maybe boredom, but that's not even consistant. I think she is just a yawner..lol

All of our dogs yawn, but Rodrigo is the big yawner - he yawns when he's tired, when he's not happy with a command, to calm down before walks or outings, and at meal time.

My dogs all occasionally do the dramatic yawn for attention. I have observed them doing the stress yawn, too.

Yawning is so strange in people too. Like how it's contagious when someone else yawns or just thinking about yawning can make you yawn. Weird!

Haley yawns for various reasons, but especially when we're trying to make her talk or howl. She'll get really vocal, but there are a lot of yawns mixed in with all the talking.

Haha! That's cute. Ace doesn't like to "sing, " but the poor guy is trained to reluctantly howl on command. I'll have to watch to see if he yawns prior to doing this. I know he doesn't like "singing" but it's cute.