Home » My Newly Adopted Dog Won’t Ask to Go Outside

If your newly adopted dog or puppy is not asking to go outside, here’s a bit of advice: Take her outside anyway!

Some dogs, like mine, just never ask to go outside for a variety of reasons.

And some just aren’t sure what to do in a new environment.

Just because the dog was potty trained in a foster home doesn’t mean she will be potty trained in your home. She may need some reminders and consistency for a few days or weeks. See my post on potty training an adult dog.

Why won’t my dog ask to go outside?

My Lab mix Ace is 9 years old and he’s asked to go outside maybe 20 times in his life, when he really had to go! Like, emergency status!

Otherwise, Ace doesn’t ask to go out; I just take him.

I don’t know why this is.

I don’t know if I unintentionally taught him there’s no need to ask because I will always take him out every 4 to 6 hours. (I think that’s the reason.) 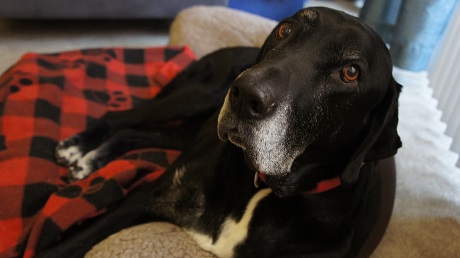 I don’t know if my dog is so polite he’s hesitant to ask. I don’t think that’s it, because he doesn’t hesitate to remind me when it’s time to eat.

Or maybe he truly doesn’t need to go to the bathroom that often.

Ever since I adopted Ace 8 years ago, I’ve always lived in apartments without a fenced yard so he’s always relied on me to take him out on a leash or at least open the door and supervise.

When I do offer to take him out, he’s reluctant to get up from his bed, like, “Oh, do we have to go? Now? Really?”

Honestly, my dog might just be that lazy. Or maybe his arthritis is a lot worse than I realize, but I think it’s just his natural tendency to lounge around.

Ace is usually pumped to go for walks, especially if my husband Josh is tagging along, but Ace also knows the potty break schedule (5:30 a.m., noon, 5 p.m., bedtime), and he’s just never excited about that.

I don’t really care that Ace doesn’t ask to go outside.

He’s literally never had a potty accident. OK, just that time when he fully relieved himself on my parents’ indoor plant, apparently out of confusion on what was allowed at their house. (“What? We don’t pee on plants in the basement here? Oh, OK.”)

He’s also had 1 accident of the, um, “explosive” kind, which I can’t blame the guy for. This was a middle-of-the-night kind of accident, and right by the door. Poor guy.

How do dogs ask to go outside?

Let’s face it, some people don’t even realize when their dogs are practically screaming to go outside. How frustrating must that be for the dogs?

Some possible signs (some less obvious than others) could include:

Seriously, it must be so frustrating for dogs sometimes when they’re obviously (to them) asking to go out and their humans don’t pick up on it.

Then, who gets scolded for having an “accident”?

How to teach a dog to ask to go outside 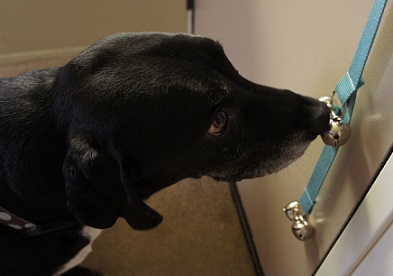 Can you teach a dog to ask to go outside? Maybe to bark or to ring a bell?

Well, you can, and I’ve written about that here.

But, I’ve found that trying to train my dog to ask to go outside just stresses him out. He’d simply rather not ask, for whatever reason. And that’s fine.

I don’t mind taking him out every few hours. I’m not lazy about this. I’m happy to do it.

Does your dog ask to go out? Did you teach him to do this?

Our situation with the pups is similar to yours & Ace's - Missy & Buzz get to go outside about every 3-4 hours, so they never truly have to ask to go. On rare occasions - when Buzz REALLY has to go- he will sit right in front of the patio door, or if he has to go throughout the night (happens about 5 times per year), he will sit right in front of my side of the bed (he knows that Mommy will notice him right away, unlike Daddy... ).

I had to chuckle at Ace's plant story...oops..Buzz "marked" a dirty pile of laundry at a friends' house once...I was too startled to really correct him. No clue what caused it, and he has yet to repeat that behavior (let's hope he won't).

My dogs don't ask me to go out that often either. We have a regular schedule too. When they do ask, Pierson is more obvious about it. Maya, however, is much more subtle. I had more trouble potty training her than I have had with any other dog, but I think part of the reason is because I wasn't recognizing her very subtle signals.

That's interesting! I imagine that is often the case with dogs that are more difficult to potty train. Perhaps the owners just don't recognize the signs. Like I said in another comment, Ace was already potty trained when I got him, so that made my job so much easier!

My last dog Henry, would always scratch at the patio door when he wanted to go outside and if he had to go really badly, he'd also be vocal. My current dog, whom i adopted last summer at the age of 11 from a rescue group, never asks to go outside. For him, I think it's partly because he doesn't want to go anywhere without company, and the rest is the way he was trained. So I make him go out at set times, but if he starts wandering around the house or seems restless, that means he needs to go outside, even though he won't just go to the door, or even really respond if I ask him if he wants to go outside. I never thought about it being because he's too polite to ask!

Aww, I'm so glad you adopted your current guy.

It sounds like Baxter is pretty similar to a lot of people's dogs. He came to us completely house trained, so I can't say what the secret is. He goes out on our schedule and will only occasionally ask for a special outing. And his ask is usually getting up from wherever he's laying down and sitting in the middle of the floor staring at us. He's even done this the few times he's not feeling well and thinks he might be sick. He takes it very seriously that he doesn't do certain things in the house.

Although he did pee on a friend's plant in the corner of her dining room the one time he went to visit. Aaaah! So embarassing.

Ace came to me 100 percent potty trained as well. I am thankful for that. Like I said in the post, he never has accidents. ... except for that time he peed on my parents' indoor plant. I had to laugh when you said Bax peed on your friend's plant. Haha! So glad I'm not the only one this has happened to!

I had taught my previous dog to ring a bell because we weren't always in eyesight and he needed a way to get our attention when he wanted to go out. So, I taught Hershey, my 100 lb. lab, to do the same. A trainer I had hired said not to do that because it puts the dog in control but I decided I much preferred the bell ringing (sometimes for nothing other than to chase the birds and squirrels) over the accidents he was having because he would wait at the door but no one was around to see that he needed out. Sometimes he does drive us batty with the bell ringing but we don't mind too much.

Yeah, I think the bell ringing works well for some dogs and maybe not for others.