Have any of you had this problem?

We didn’t nickname our dog Ace “The Turd Burglar” for nothing.

Ace was on medication years ago that made him hungry all the time, and we often caught him searching in the litter box for “sand biscuits.” (Update: Ace has passed away.)

We got our dog to stop getting into the litter box by:

2. Placing the litter box in a corner, facing the corner.

3. Putting up a mild barricade or obstacle. I think we just used a suitcase or a small chair, but you could also use a baby gate.

By doing those things, the cats could still easily get to their bathroom, but it was not as easy for Mr. Turd Burglar.

Thankfully, the habit eventually went away. It helped that Ace was weaned off the medication (prednisone). 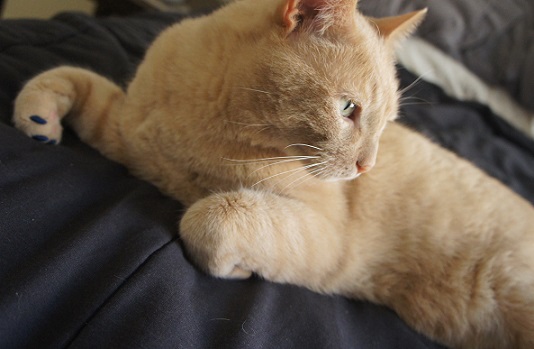 When saying “no” doesn’t work

If you’ve tried ignoring inappropriate behavior and rewarding good behavior and it’s just not working, here are some other ideas to try.

1. Use a squirt bottle filled with water to squirt at your dog when she steps towards the litter box.

2. Try the Pet Corrector, which shoots air at the dog. Or the Doggie Don’t, which makes a loud, static sound dogs don’t like.

3. If all else fails, you could try using a shock collar (e-collar) with a remote.

Yes. I’m not saying this is what you necessarily should do. I’m saying it’s an option, depending on the situation and how badly you want to break this habit.

I will often recommend a shock collar to stop a dog from eating poop in the yard, which is a common problem that’s difficult to stop.

Sure, I recommend you try positive reinforcement first, but sometimes that’s not enough or sometimes the owner just isn’t able to be patient enough or consistent enough.

For example, if the dog is eating poop in the yard, my first recommendation would be to go outside in the yard with the dog every single time he goes out.

Well, some people are just not willing or not able to do that, but sometimes they’re able to stand at a window and watch, ready to give a correction with the shock collar.

You have to do what works for you and your dog, and I think getting a correction or two is better than the dog eating poop its whole life.

But let me know what you think and how you would solve this problem.

What ideas do you have for keeping a dog out of the cat’s litter box?

How to stop my dog from eating poop in the yard

The Turd Burglar!! Haha! When Kaya & Norman were young I kept the litter box in the bathroom & trained them to stay out of the bathroom, saying out every time they stepped foot in it. They learned pretty quick. Now Gina does her business outside so no litter!

Though when she's at my parents house I keep her indoors & her litter is kept in the laundry room. The dogs never notice/bother with it. But her poops have almost no smell since I switched her to raw chicken instead of can food!

On a side note...Norman ate his own poop when he was a puppy. I read that I should sprinkle meat tenderizer on his food & it would make him not like the taste of his poop. It worked! I only needed to do it for a couple months. :)

I like your idea of keeping them out of that room. Good idea. I also love that Gina doesn't even need a litter box now. Beamer used to just go outside as well.

We call our dog Turd Burglar too! Because he is needlessly interested in playing with other dogs' business and because it is such a good name. To his great relief we don't have a cat, so at least I don't have to worry about him getting into a litter box!

Perfect tips! Haley raided our cat's litter box when she was younger, gross! I hope you don't mind that I updated my article this week with a link to your tips. :)

The ultimate way, maybe, is to train your cat to go to the bathroom in the toilet. A co-worker of mine did it. So it is possible! However, if the dog drinks out of the toilet.... Not a good idea. I used to housit a lady who kept it in her tub... and moved it everyday to shower... I used the other shower as much as possible! I wasn't going to be moving a litter box every day!

But keeping it as clean as possible would be the best. A covered one might or might not work, depends on the dog. :-)

Missy liked my bathroom trash can one night during a certain part of the month... I now have a lidded trash can in there. :-)

Oh god! Yes, Lana got into the trash one night as well when we had her ...

Hiccup used to do this when we briefly used an uncovered litter box, but a covered box immediately stopped the issue, thank goodness! I thought it was so gross, and I worried that he'd get an intestinal blockage from the litter. Honestly, sometimes I wonder why I have a dog in the house, then I remember that I only have the problem because I also insist on keeping a small animal that poops in a box in my closet, and I resign myself to my own crazy.