Home » Returning a Rescue Dog Due to Separation Anxiety

Families have good intentions when they adopt a dog, but sometimes the dog just isn’t a good fit.

I wrote a post about returning a rescue or shelter dog, and the following is a specific example of a family that chose to return a dog due to separation anxiety.

Karen Tong said she adopted a 3-year-old chocolate Lab mix through a local rescue group and named him Sundance. They are pictured together below.

“He was a great dog and well behaved, but when we left the house, he experienced severe separation anxiety and was destructive,” she said.

She tried crating him in a metal crate, but he was able to bend the bars and escape. One day, he escaped and then clawed and chewed his way through the bedroom door.

“There was about $1,000 of damage to our home that night, including having to replace an entire bedroom of berber carpet,” she said. 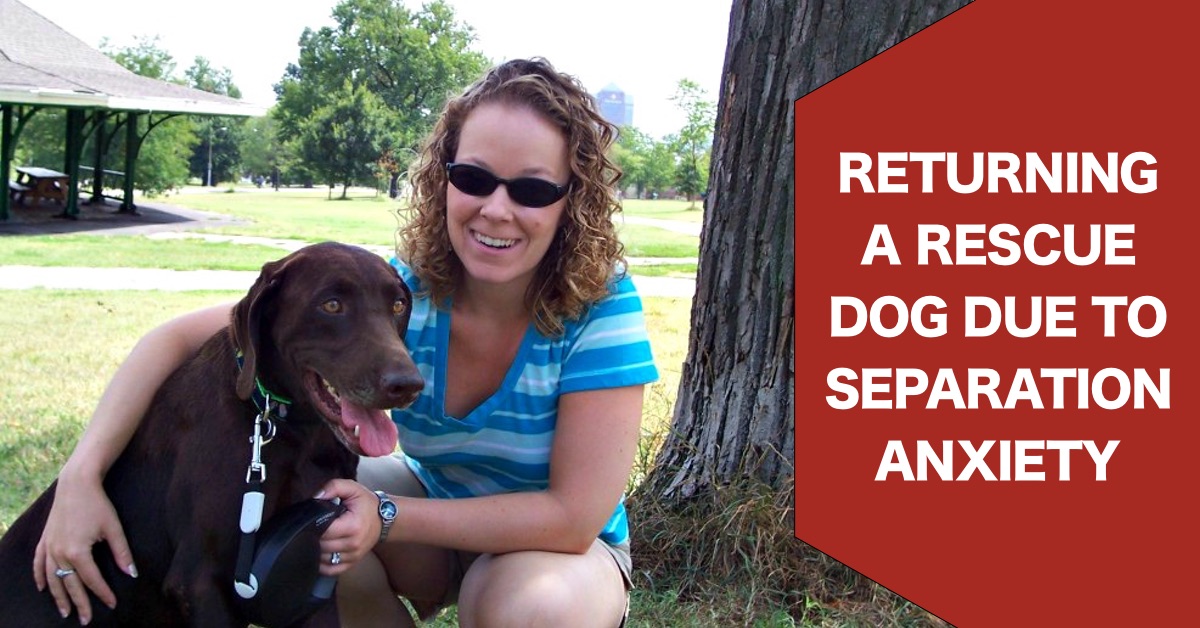 “Since we both worked full time, we realized that we didn’t have what this dog needed. We couldn’t stay home with him all the time, and we didn’t have, or want, another dog for company.”

Because of Sundance’s severe separation anxiety, Tong realized they didn’t have the time or resources he needed. 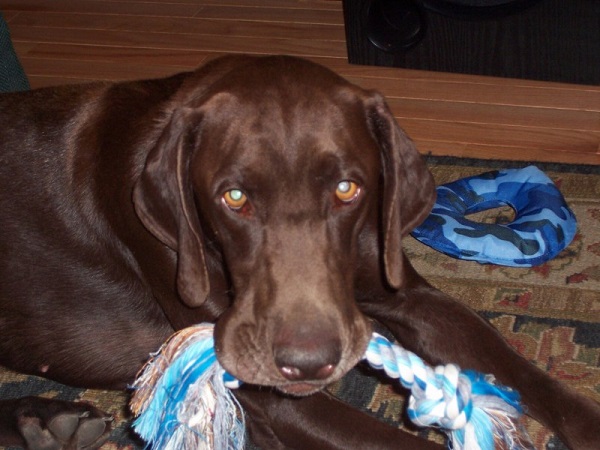 “We worked on it with him over a week or so, but the destruction became too much,” she said. “Once the crate couldn’t keep him safe, we were concerned about him hurting himself when we were at work.”

She ended up returning Sundance to the rescue so the group could find him a family to better suit his needs.

“We were really heartbroken and felt like total failures,” she said.

Luckily, the group was able to find Sundance a new home with another dog and a stay-at-home mom.

“He has lots of company.”

A month or so later, Tong was asked to foster another chocolate Lab through the same rescue group. He was about 6 years old. (And points to this rescue group for encouraging her to consider a different dog!)

After a month or so, she decided to make it official and adopt the dog, who she named Chip (pictured below).

“He’s still with us and is about 14-and-a-half years old now!” she said, adding that Chip was “so worth the wait.”

Advice for others in a similar situation

No matter how you obtain a dog, Tong suggests you try to get as much history about the dog as you can before adopting. She also recommends you try fostering the dog first if possible.

“But also, be realistic,” she said. “If you can’t give the dog what it needs, then it’s not fair to keep it.”

In hindsight, she said she’s glad she gave Sundance back to the rescue so the group could quickly find him the home he needed. 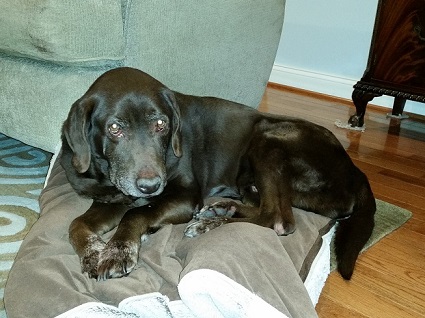 Plus, returning Sundance led her to Chip.

“I’m so glad we ended up adopting a middle-age dog who is now a relaxed, mellow senior lab,” she said. “He is the perfect pet for us.”

Have any of you ever had to return a rescue dog?

Related posts:
Questions to ask before adopting a dog

How to choose a dog from a kill shelter

This post reminds me of a stray I took in that had severe separation anxiety. I tried leaving her crated & uncrated. Either way she yelped & howled the entire time I was gone. I only left her twice for a couple hours but that was enough time to alert my landlord that I had 3 dogs & he was ready to evict me. Unfortunately that made me really have to speed up the process of finding her a new home but at least I was able to make sure her adopter would be informed about her issues & able to accommodate her needs. The funny think was that she was very comfortable being left alone in the car so I ended up bringing her with me every time I went out. :)

So glad you ended up finding the dog a home, but that is a perfect example. I'm sure that was stressful! In so many living situations you just can't have a dog barking nonstop every day! That is always a concern of mine when I foster dogs because I've always rented apartments and townhomes. Can't exactly have a dog barking all day.

I suppose those suggestions do work for some people, depending on the situation and the severity of the separation anxiety. But like you said, people are often given those kinds of responses as though it's that easy. The "just get another dog" suggestion is what scares me the most! The dogs I've had with separation anxiety could care less that Ace was there. They wanted to be by ME or at least another person.

Mom's first dog had severe separation anxiety. She was about 16 mo old, 100 lbs, had a litter of pups and all were dumped off at the Humane Society. She started by taking down the Christmas tree, ate through all kinds of candy, chewed up an LP collection, shredded books, it was a scene I hear. With lots of patience, rewarding and crating, they worked it out. Mom was flying at the time, so every time she got out her luggage and uniform Trine would stress, but it became routine. It often helped too when they left the tv on and lights as if they were all home together. Mom couldn't bear to bring her back and she never regrets working through it all with Trine.

I'm sure that was a very stressful time for your mom, but I know how much she loved Trine. I'm so glad everything worked out in her case.

How awesome that the rescue group didn't write her off because she returned her first foster dog! :)

I know! Such a good example for other rescues.

I hate hearing stories about false ''happy endings''(when rescue dogs are are adopted and then returned), but I'm glad this story ended well and he found a permanent home.

I can't help but feel that they didn't give the dog enough time to settle into his new home. Any animal that is put into a new situation takes time to adjust. For one animal it could be a week, for others it could be a few months, but at least everyone got the the outcome they wanted- dogs included.

Yes, good points. Of course every animal does need time to adjust, and I think we sometimes forget how much time they might need. But for me anyway, when a dog is breaking out of a crate and damaging property, that is a little more serious. I think I would've had to return the dog as well, unfortunately. I know because I returned a couple of foster dogs for the same reason. It was definitely a difficult choice and a lot of stress.