No one really takes PETA seriously.

Remind me to tell you about my job interview with PETA sometime. That was something!

I tend to ignore PETA on this blog, but recently I read about a PETA representative opposing San Diego County’s new no-kill policy.

Yes, People for the Ethical Treatment of Animals is against no-kill animal sheltering.

But first, let’s get to the exciting news in San Diego!

San Diego County is No Kill!

The San Diego County animal shelters announced last month that as of July 1, 2015 they will no longer kill animals because of a lack of space. They will only euthanize (in the true sense of the word) animals that are truly suffering or too vicious to be adopted.

It’s inspiring to be in a county where the shelters and rescues are working together. This includes several non-profit organizations and rescue groups as well as the county’s animal services.

Here is one of the dogs I met at a recent adoption event for Labs & More of San Diego: 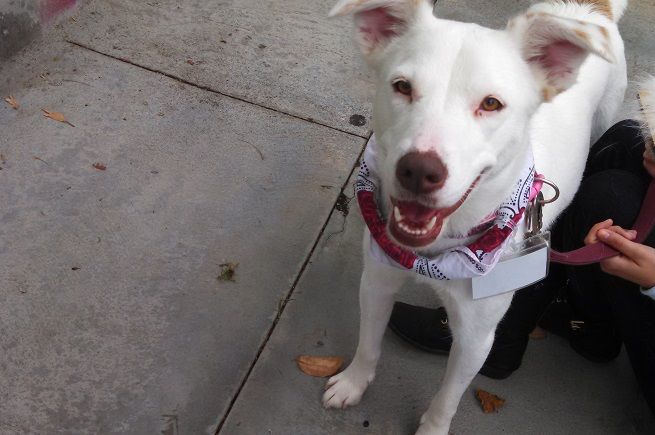 The San Diego Union Tribune wrote about the county’s new no-kill policy here. The article explains everything well and focuses on the programs the shelters have been working on such as:

Sure, there will be challenges. No kill is never easy, but it’s great to see such a serious discussion and goal. Read more on what no kill shelters are doing differently.

A common problem with news stories related to animal welfare is that reporters try to cover “both sides” of the issue, giving equal time to both.

Reporters will sometimes interview one person from each “side,” even if the person on the opposing side is literally the only one in opposition.

The KC Dog Blog has written about this issue here in relation to breed bans and dangerous dog laws. When just a handful of people are in favor of a breed ban, they are often given equal representation in the media even when the majority of experts, dog lovers and individuals are opposed to breed bans.

Unfortunately, the San Diego story is a good example of this attempt to remain “fair and balanced.” The reporter had to call all the way to Virginia to find the token person who apparently opposes San Diego’s new policy. Yep … hello, PETA!

From the Union Tribune: (Bold emphasis mine.)

Teresa Chargrin, animal care and control specialist for People for the Ethical Treatment of Animals, said from Virginia on Wednesday that the coalition’s efforts [sic] but expressed caution about expanding the number of foster homes too quickly. Other shelters around the country have found that some foster homes exploit the animals and are no better than puppy mills, she said.

Foster homes are no better than puppy mills?

Chargrin goes on to say no kill is a “noble goal” (as though it’s never been achieved) and shelters have been “working on it for decades.”

What she doesn’t mention is there are currently more than 233 documented no-kill communities in the United States. View them all here (listed down the right-hand side).

The Union Trib doesn’t mention anyone from San Diego who is opposed to the new policy. It seems irrelevant to include someone all the way from Virginia who does. But, you know …

The great news is so many communities around the country are embracing the concept of no kill!

What are some of the things your community is doing to save more dogs and cats?

How to Quickly Get Dogs Adopted – Decreasing Stay Time at Shelters

Why Do You Foster Dogs Or Cats?

Hahahaha!!! Foster homes exploit the animals! I'm sorry, considering I just spent almost the entire night up with 3 newborn kitten fosters (one of whom died during the night) and am suffering extreme lack of sleep from all that EXPLOITING I was doing, I just can't stop laughing. Hang on while I drive 15 miles to the rescue's vet during rush hour to claim my reward money . . . what? You mean saving lives is my only reward? PETA YOU LIED!!

OK sorry rant over. I am so freaking happy to hear about San Diego! I guess conflict sells, otherwise I don't see why that story needed to be anything other than happy news! Virginia indeed.

I am sorry to hear one of the kittens died. I know you've been through that before, but I'm sure it's still hard. Thank you for all you do for homeless animals.

I never listen to a work anyone from PETA says but I love that San Diego has gone no-kill. We have a local non=profit that provides free vaccinations, vet care and spay/neuter to homeless and low income people in the area. I love that they are working to keep dogs healthy and in their own homes that might have been surrendered or needlessly breeding otherwise.

Those types of programs are so important. I love when organizations work to keep pets in their homes and out of the shelter system to begin with. Sometimes just a week's worth of food or paying for basic vaccinations can make all the difference.

I've come to the conclusion that PETA just likes attention so they say things to get people to look their way. It's lovely to see rescues in my community doing their best to save dogs in high kill shelters in other states, find homes for senior pets, and pick up and rehome "free to good home" dogs they find on Craigslist. They're my hereos.

I always take whatever PETA says with a grain of salt, they're definitely not one of my number one sources when it comes to animal welfare. I don't see any problems with their anti fur campaigns, etc but a lot of them go too far. We've definitely got a lot more rescues sprouting up here in Michigan that are no-kill. I've also noticed the county shelters are reaching out and establishing relationships with them so they can get their "unadoptable" dogs rescued. Since we have a lot of BSL communities out here the shelters won't adopt out any dog they suspect has Pit in it - but luckily there's more and more support from the local rescues helping to get them adopted.

I see nothing wrong with PETA's statement. They did not say that all foster homes are like puppy mills. They did not even say most. They said some. I would agree that there are a few foster homes that are not up to par. So long as the shelter has something in place to verify the quality of their foster homes, then the shelter can greatly reduce the chances of using a puppy-mill-like foster home. This goes along with the issue of adoptions. Some people think extensive applications are bad because they limit their potential adopters while others think that any home is better than no home at all and certainly better than death. I believe in something in the middle. There should be some evaluation for adopters as well as for foster homes. My primary issue here is with the media. I'm actually surprised that the media, in this case, actually went out of their way to get both sides. Too often, the media only takes one side. Or if they take both sides, they don't adequately represent both sides. And they have a tendency to take things out of context. Therefore, I will not judge PETA based on this one statement from this one PETA representative as presented by this one article.

I don't really see anything wrong with what Chargrin had to say as well. Spaying and neutering would be the most effective way to cut down on births of unwanted cats and dogs. I think the problem people have with this PETA representative is her statement about foster homes. It makes sense. If there are people who abuse the children they foster, then for sure there are those who abuse the animals they foster. Why one would foster either only to abuse them is beyond me.

I always appreciate hearing your take. You're really good at not judging anyone.