A dog rescue group in San Diego is being sued after a Labrador named Charlie bit a man in the nose shortly after his adoption took place, according to the San Diego Union-Tribune. This occurred less than two months after the dog nearly bit off a woman’s finger prior to adoption.

So we’re not talking nips.

From the San Diego Union-Tribune:

Ryan Hawblitzel nearly lost his nose and has significant scars from the Jan. 24 bite, according to his attorney, Rocky Copley. He said the attack wouldn’t have happened if Labradors and Friends Dog Rescue had told Ryan’s family that Charlie had bitten another person the month prior, and if the county had followed proper protocols after that earlier incident.

“If Labradors and Friends had informed (Hawblitzel’s parents) about the prior attack, they would not have brought the dog into their home,” the lawsuit says.

Hawblitzel is suing the county, Labradors and Friends dog rescue as well as two volunteers from the group for an unspecified amount of damages. Copley said Hawblitzel might need more surgeries to recover from his injuries.

(Charlie is not pictured.) 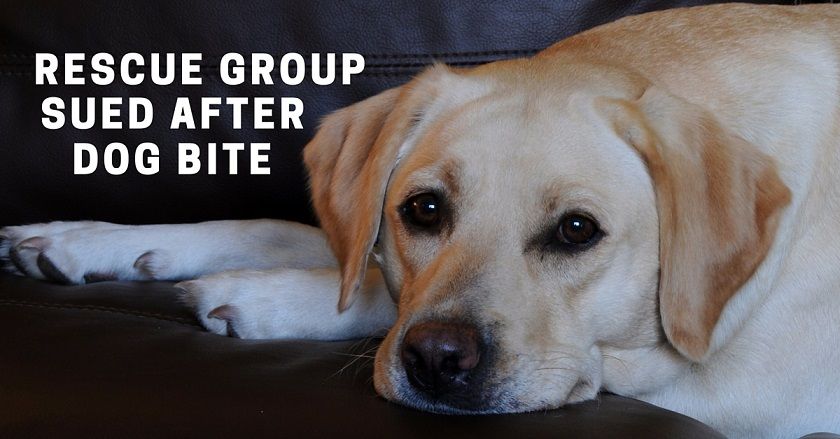 I wanted to bring up the story here because it’s a good reminder how rescue groups, shelters, foster homes and other volunteers need to disclose everything about dog bites and aggression to potential adopters. No exceptions.

I don’t know how this particular case will turn out legally, but I do know common sense says rescue groups should disclose all known bite incidents to adopters.

I help with dog adoptions myself, and I know it’s easy to downplay or even ignore certain “nips” or bites and say it was the person’s fault or the nips happened because of special circumstances.

A bite is a bite.

You can’t predict everything but in this specific San Diego case the dog had a record of biting and this was never explained to the adoptive family, at least according to this article.

This is frustrating on so many levels.

A man was severely injured, the dog was (understandably) killed after the incident and rescue groups in general look irresponsible because of this rescue group’s failure.

I volunteer with Labradors, Retrievers & More, a different Lab rescue in San Diego that is often confused with Labradors And Friends.

So there are two things we can take away from this:

1. As rescue volunteers, we need to make sure we’re being responsible.

This story made me examine my own history as a foster volunteer and I have to admit I have not always been as clear with adoptive families as I should have been.

Today I realize all rescue volunteers have the responsibility to be honest. If you are a volunteer, report all bites or behavioral issues to a board member. If the rescue you are working with isn’t honest with adopters, then find another rescue to support.

2. Adopters need to know what kinds of questions to ask.

Adopting a dog is a wonderful way to get a pet. One of the best ways to get a well-behaved, well-socialized dog is to find an adult, fostered dog from a rescue group because usually the foster owner knows a lot of information about the dog.

Still, when adopting any dog it’s important to ask questions such as:

Rescues need to be honest.

It’s important to get dogs adopted, but a dog adoption should never take priority over a person’s safety.

I’d love to get your thoughts on this topic.

Have you ever been in a situation where you think a rescue group should have disclosed additional information?

When to euthanize a dog that bites

We can’t save them all

I'm sorry, but although I know that rescue groups do a great deal of important work finding good dogs good homes and they deserve great praise. I'm getting a little crazed by this do anything neccesary to get an animal a home mindset..There are so many great dogs getting euthanized because resources are shunted to extreme feel good cases like when I see dogs with no front legs being "rescued" and having special prothestics made so they can stagger around or dogs that are blind n deaf being put up for adoption, or rescue groups that make it so hard to get one of their dogs that great dogs miss out on great owners, I just shake my head. There are soooo many fantastic dogs being put to sleep because resources are wasted on marginal dogs. Take that $1000 you spent for "special" equipment for your half dog and pay for 200 dogs to be spayed free at a low cost spay and neuter clinic. And while I'm on a rant, ALL municipal animal shelters should offer free spay and neuter for any cat brought in. Our dog shelter does a pretty good job any more with the dogs, but I volunteered in the cat room and it was hell. Healthy strays came in and immediately got cat flu, too expensive to vacinate apparently. So cats were left to die in little cages. The lucky few that stayed healthy where chosen by color or beauty, despite the fact that they were howlers, or scratchers or antisocial. I never saw one person ask a worker who they thought might make a good pet. The overflow was so great that cats were euthanized regularly. In conclusion, not all animals just because they are cute or purebred deserve to be rescued. Nature is way more important than looks. Sorry to all those I've offened.

I'm so aggravated that the rescue didn't disclose a bite history. By trying to get that dog a new home, they set him up for failure. I know my issues (having had some scary dog incidents as a child), and I would never bring home a dog with a bite history, but there are lots of people who can help a dog like that and are willing to try. I'm so disappointed that the rescue wasn't forthcoming because it makes adopting a dog look like more of a gamble than it is.

I know. So frustrating.

We have 2 rescues and I realize now that I was not a very smart in adopting. We were told that one like to play in the snow, which is true but what they left out was that one of us had to be pretty close for that to happen. He likes his owner to be close by all the time. He is getting better in the house and will go in the other room to sleep now. Maybe this winter he will be able to tolerate being out of sight long enough to enjoy the snow. We have a fenced in backyard and His sis Sadie loves the outside.

Hi Lindsey, I have written before. I have since rescued the most precious shih-tzu in the world, she's docile and follows instructions and me beautifly The other day we were walking and a neighbor man, was walking toward us and she was barking. this was my fault, instead of taking her away, i said to him if you crouch down she will be all right. he crouched down and started to pet her under her chin ,and she growled . he walked away and we walked away. i want to know if you consider this aggressive, i don't and i feel she gave a lot of warning, She lays with me for hrs, and follows me from room to room, never jumps or lunges and hardly barks at anyone, not even dogs

Congrats on your new dog. It sounds like she was scared of the man and she was showing that by barking and then growling. In the future, if someone is interested in interacting with her but she seems scared, I would politely ask that person to stand sideways so they are not facing her. Then, see if she would like to approach/sniff the person. They should be instructed to continue ignoring her and to possibly crouch down at that time but still facing sideways. Then hold out a hand for her to sniff.

Does that makes sense?

From the San Diego Union Tribune: “He was just sitting there on the couch with the dog” when the attack happened, Copley said. Personally, find it hard to imagine the dog actually lunging upwards to specifically target the nose, and suspect Ryan may have actually been playing with the dog, putting his face right into the dog's face, which sparked fear aggression and thus the bite. I would certainly like to hear more on the exact circumstances. But that is neither here nor there as far as this post goes. Excellent advice for both the rescues and any soon to be rescuer. Whether intentionally or inadvertently, Rescues may not give the adopting party all the necessary information about the dog's behavior, so it is very important for you to ask the questions listed before making the final decision.

I'm sure the man made some mistakes. I know I've done stupid things around dogs and have been growled at or bitten. You'd think I'd know better.

And of course the main focus here is that this dog had a bite history that wasn't disclosed.