Every morning when I wipe off Baxter’s feet after our first walk of the day, I clip two toenails.

This is an incredible accomplishment.

Bax hates having his nails clipped. When we first got him, my husband and I went to clip his nails and he freaked out. We thought we must be doing something wrong. We called my friend who’s a vet tech, and she offered to show us how to do it properly. 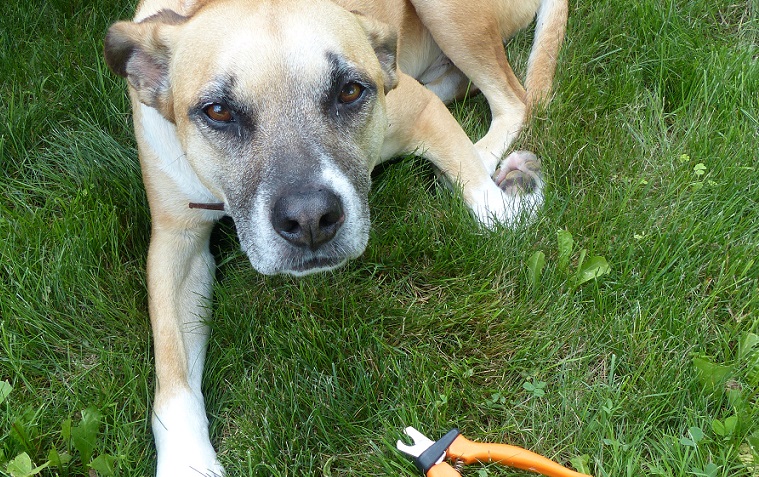 That nail trimming session involved Baxter pinned to the ground thrashing and growling and snapping. The leash was wrapped around his jaw as a makeshift muzzle. It took both Matt and I to hold him down while my friend clipped his nails.

But that was what a vet tech—a professional—did, so we figured that must be how it goes. Some dogs just don’t like getting their nails clipped. Matt and I went out and bought a proper muzzle, and every month we had a wrestling match with Baxter.

Everyone was stressed on nail cutting day, Baxter most of all. I finally decided I wasn’t going to do that to him anymore.

How to get a dog to tolerate nail trims

I started a campaign of desensitization.

For a few minutes every day, I touched his feet. I stroked his legs, touched his feet, examined his toes, tapped his nails, held his foot. Every day for about two weeks.

I should say here that we don’t do a lot of treat training, so food rewards were not part of my desensitization plan. Our trainer (whom we did consult about Bax’s off the wall toenail reaction) is adamantly against treat training, so we’ve never gotten in the habit of using treats. 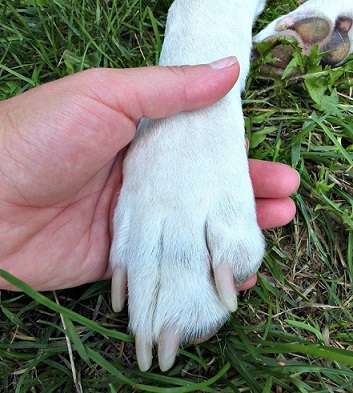 After the desensitization session, Bax would get a massage, which he loves, or scratches in all his favourite places.

Then I progressed to tapping his nails with the clippers. Again, this went on for about a week and each session was followed by massage. Then I started putting his nail in the jaw of the clippers. I was holding his foot the way I would when I cut the nail. The clippers were touching him the way they would.

I restrained myself from trying to cut a nail, no matter how calm he seemed.

Eventually after weeks of my desensitization campaign, I clipped a nail. There was jerking and growling and screaming (seriously, you should hear this dog scream). I hadn’t hit the quick or hurt him. He was fine. He was just upset. I scratched his neck—his favourite spot—and he calmed down. We left it at one nail and went on with our day.

Desensitization continued, and I tried another nail. His reaction was the same. There was one point where Bax put his teeth on me hard enough to bruise my hand. I didn’t give up and persisted with touching his feet, tapping his nails, massaging and scratching him and clipping one toe nail every morning.

Slowly, Baxter calmed down. He’s still not perfect. We’re up to clipping two toe nails every morning. I try not to push it more than that. Sometimes there’s a reaction of a grumble or a squeal, but there is no more snapping and no more meltdowns. I’ve clipped too short a couple of time and hit the quick. These incidents haven’t seemed to set us back at all. Bax will let me swab his nail and hold it until the bleeding stops. 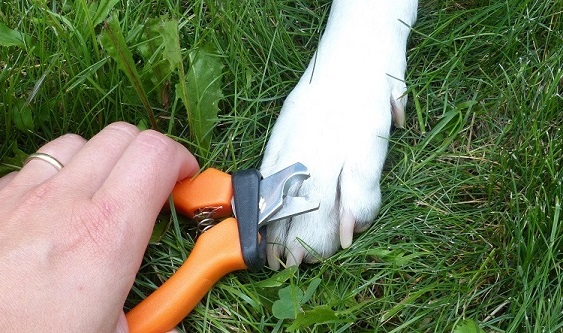 Over time, the position that Baxter is most comfortable in has changed.

At first, he was calmest in a sit with me picking his paws up in front of him. He seemed less anxious about having his front nails clipped than his backs.

Now, he stands every morning, and I bend his paws back under him so that he can’t see. When I clip his back feet, he sometimes doesn’t react at all—I love it when that happens.

Baxter is still a bit sensitive about his feet. I would never ask him to let someone else cut his toenails. I feel like Baxter has come to trust me around his toenails, and we’ve found a routine that works for both of us.

[quote_center]I feel like Baxter has come to trust me around his toenails, and we’ve found a routine that works for both of us.[/quote_center]

1. Don’t rush it. There’s no rule that says you have to cut every toenail all in one session. Clip just one nail a day—or every other day. Find what works for you and your dog.

2. Start small with handling your dog’s feet and toes. Get him used to the clippers, your grip and the sounds over time.

3. Be calm. You might be anxious about how your dog is going to react, but if you can be calm, he’s more likely to be calm. We’ve learned that my husband does not project a calm energy when it comes to nail clipping. Remind yourself that they’re just toenails. If today doesn’t work, you’ll try again tomorrow (see #1 above). If you want to talk, do it in a soft voice. I found a shhhh sound sometimes helped.

4. Try different positions. Have your dog standing, sitting, lying down. Try holding the feet in front or curled under. Pay attention to where your dog seems to be most comfortable.

5. Use a reward to associate nail clipping with something positive. Treats and food are obvious rewards, but petting can work too. Touch is a powerful communicator with dogs. Mixing in massage or scratching your dog in his favourite spot can strengthen your bond.

How does your dog handle nail trims?

Julia Thomson is a regular contributor to That Mutt. She maintains the blog Home on 129 Acres.

How to remove mud from your dog

My review of the MIU PET pet shower 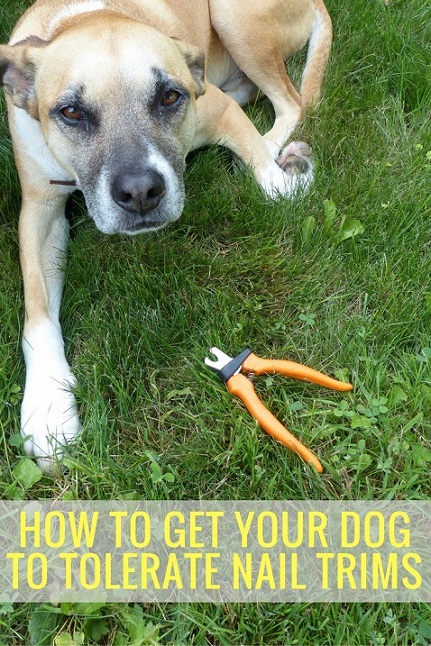