Why Exercising My Dog is More Important Than Training

Home » Why Exercising My Dog is More Important Than Training 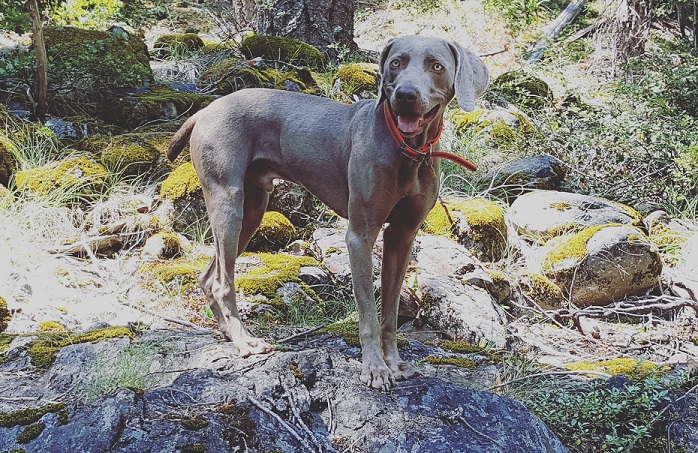 Professional dog trainers tell me it’s more important to tire out my dog mentally vs. physically.

More than one told me my weimaraner Remy should only need 20 to 30 minutes of exercise a day (Ha! Good one!), and that I should focus on trick training, impulse control and puzzle toys.

These are all great suggestions, but I put physical exercise FIRST for most dogs. Especially a high-drive, working dog like Remy.

Remy is a pet, but he comes from a line of dogs bred for serious hunting and endurance.

So as soon as we get up in the morning, we walk.

And several times per week we either run, head to the dog park or hike. We work on obedience training regularly, but we walk every single day no matter what.

Training and rules and impulse control and socialization are important, but exercise makes the most difference for the largest percentage of dogs.

When I used to volunteer to take shelter dogs to adoption events, I enjoyed handling the most “challenging” dogs with bad reputations. They were always well behaved for me, not because I’m an amazing trainer but because I took them running right before the event!

These dogs showed no sign of obedience skills, but they could behave in public simply because they’d had a chance to burn off some stress and energy. I don’t mean running them to exhaustion, I mean just running with them for 30 minutes.

When we lived in San Diego, I took Remy to the country for the 4th of July. I got to see my exercise philosophy in action.

We spent a week with family on their ranch and camping in the mountains. Remy got to be off leash the majority of the time. We hiked for 10 miles, and he got to run and play with other dogs. Simply, he got to be a dog without the limitations of our usual (at the time) city life. 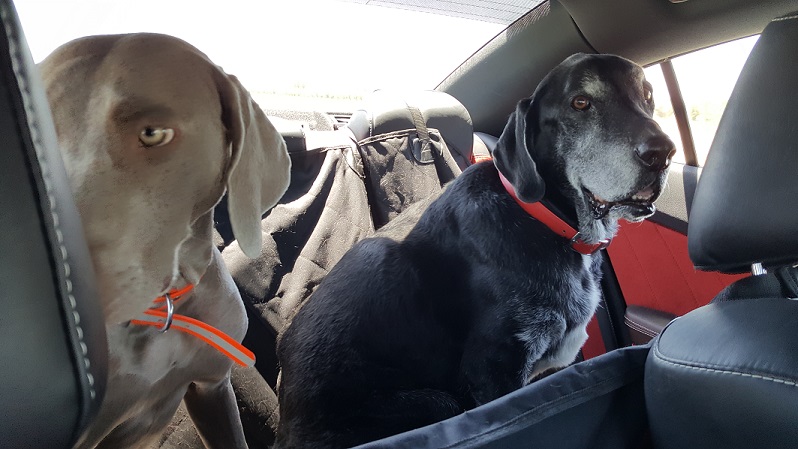 Once you remove all the extra energy from my dog, he’s a different guy. Calm. Easygoing. Doesn’t nip, jump or run off.

As a country dog, Remy did not obsessively eat dirt or pieces of trash or try to pick up rocks like he does in San Diego. He voluntarily took naps outside and even put himself to bed by retreating to his open kennel.

The difference was unbelievable. My dog’s true personality finally got to emerge.

Of course, Remy was also tired from meeting new people and dogs plus all of the new sights, smells and experiences. He had a good mental workout.

But you could almost see the energy relax around him after just one afternoon off leash—freedom to run as he wished, make choices and just be a weimaraner. 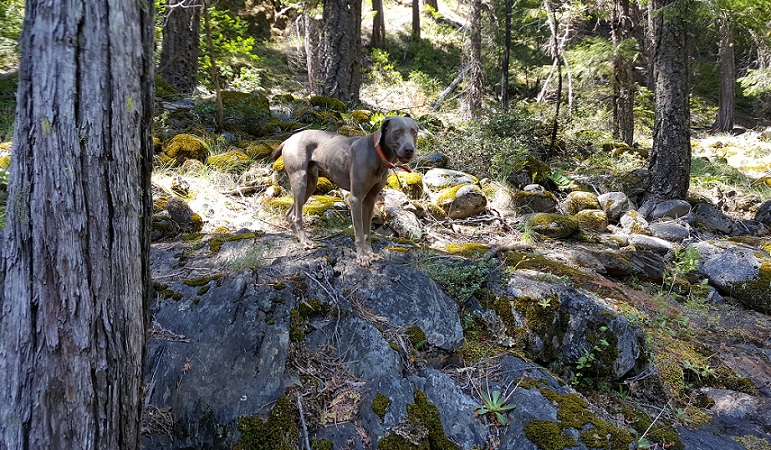 And then we returned to the city with all the restrictions of urban life, and I looked for ways to continue that freedom for my dog—more exercise, fewer boundaries.

I even loosened up my rules.

Does it really matter if my dog walks at a tight heel? Not really. Does it matter if he sits perfectly in front of me when called? Nope.

But will he stick near me and not run off? Will he pay attention when I say his name? Does he avoid conflict with other dogs? Can he handle himself in new situations?

Perhaps these are the training concepts that matter most no matter where we live.

And believe me, I’m all about training. This entire website is mostly about dog training!

I’m just trying to say that sometimes the solution to a problem is a lot simpler than we make it.

Remove the stress and energy and you’ll remove the behavioral problems too.

A tired dog may or may not be a good dog, but he’ll have an easier time being himself.

That’s all I’m ever really looking for. Just letting my dogs be dogs.

Do you have a similar approach to exercise and training?

Or do you see it differently?

Let me know in the comments.

Update: Since this post was written, my dog Remy has been training for long-distance running. He’s a much happier dog now that he’s found his true work. He is a lot like the “country-dog” version of him I described in this post.

2nd update: We’ve moved to a more rural area and it’s much better for Remy and I!

Also, thank you for supporting That Mutt on Patreon.

How to live with a hyper dog in an apartment

Putting in the work: Any dog can be a good dog 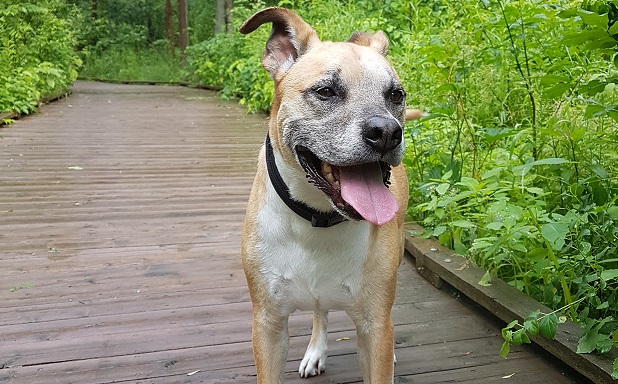 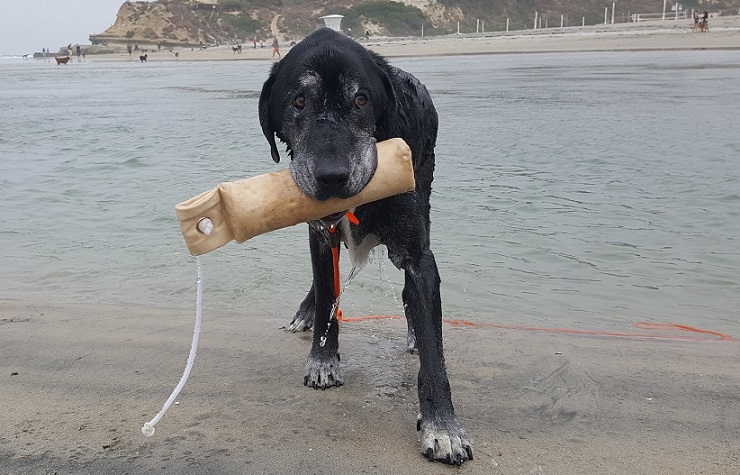 Do I need to neuter my dog? He is a blue heeler and is so hyper he pulls me to the ground when its time to go. He absolutely LOVES to ride in the truck in a cloth crate.

It's your choice if you want to neuter him. Are you asking if it will decrease his energy? My opinion is it won't. What works is a ton of exercise, ongoing training and socialization.

I so agree in am recently retired from the media so field and my "side" busy was of pet sitting and dog walking is now my job! I SO AGREE WITH YOU that exercise is the key. I have a great Dane and GOLDENDOODLE have walked for several years a d now that I am doing 3 days a week we have all changed, I am not a grainer but they love comimg with me and learning things on their walks has really improved their behavior. Am not a trainer but we are doing something they LOVE so they are motivated!I focus on listening to me,socializing appropriately with humans and other dogs. Even the dogs family has noticed

I agree completely. I have a border collie and a small beagle and we walk a lot. I walk more with my 12 year old border collie because she really wants to. We try and go all over the neighborhood so she can get New smells. The beagle who’s 5 is more of a couch potato and sometimes we start by dragging the beagle (she wears a harness so I don’t hurt her, but do laugh). Eventually , after about a block she decides that she’s really going and then has a gay old smelling time. We are also really fortunate in our 5 county dog parks, where the border catches her ball for an hour as we walk and the beagle chases the border collie and smells and rolls in anything at all stinky. That is when they really do become themselves and these are condo dogs, but I’m retired and we get lots of exercise. They love it.

I liked hearing about your experience and what you do to exercise your two dogs. Just shows how dogs don't need a yard to be happy!

Well, as a fellow Weimaraner parent I concur wholeheartedly about the need to burn off energy before you can expect him to be a student or a gentleman. I can't wait until his joints are well formed enough that I can take him on longer jogs. This way we'll both be tired at the same time. He's only about 13 weeks though, so quite some time yet before he can start logging miles. I have recently begun though taking my jogs in the hood here once a week and swinging by the house to let him join me for the last 0.5-1 mile. Turns out my jogging pace is barely a fast walk for him, so I figure doing that once a week won't harm his joints. Best thing though is a day like today when I take him to doggy daycare. He runs more or less nonstop with his dog pals, takes a nap at noon and then does more running around until the evening when I pick him up after my own day's work. Sometimes he even falls asleep in the car on the way home after daycare he's so wiped. I tellya if money was no object he'd just go there every day M-F while I'm at work. Even a long hike or day at the beach won't knock him out like that does. He's a completely different guy when he's had his exercise, and as far as I can tell more is better!

So jealous of your weim puppy but also so glad I'm passed that little puppy stage. Mine was a psycho! Haha. So much wild energy in the evenings. I know what you mean about how they are usually just walking fast when we run. We are so much slower than them. At least I am!

I do think that a good walk at the start of the day is great stimulation for dogs, although the benefits aren't just physical. I think my dogs get a lot of mental stimulation out of sniffing around and meeting other dogs on their route that is maybe not on the same level as training, but is nonetheless important.

That said, when my border collie was a puppy and too young for very vigorous exercise like running with me, training did help wear her out a lot more than just the seven miles of walking and hour of fetch we played a day. I think using training to tire dogs out can be beneficial in some situations where it's impossible to provide enough physical exercise (too hot outside, you have elderly dogs or young puppies, etc.). But there still needs to be a baseline of a good solid walk or other regular exercise before that training is going to alleviate any built-up energy.