I doubt I will buy a puppy from a breeder unless the dog will be used for some specific kind of work. I am interested in buying a protection dog, for example, and it will not come from a shelter.

People will criticize this decision.

But I have made the choice never to judge anyone by how he or she wants to obtain a dog – the process is a personal choice.

“Rescuing” is not the only humane way to get a dog.

Pretty much any dog or cat can be considered a “rescue” these days. I know one man who “rescued” his purebred dog from a pet shop for $500. He sincerely believes his dog is a “rescue.”

I know more than one person who adopted a second dog just so he could call it a “rescue” and fit in better with his local dog community. People can be verbally hostile to the owners of dogs from pet shops or breeders.

But the trendy way (and some would say the only acceptable way) to get a dog right now is to “rescue” that dog.

I used to consider my mutt Ace a rescue until I became irritated by the whole concept of rescuing. 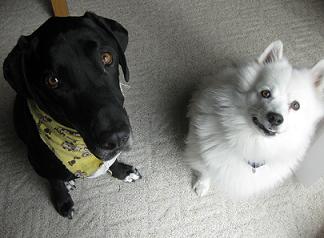 I don’t call him a rescue anymore.

I just wanted a cool dog, and some lady in Ada, Minn., happened to have a free, housebroken black lab mix.

All of my animals are “hand-me-down” pets. This is a more appropriate term to describe how I acquired my mutt Ace as well as my cats – Beamer and Scout.

Beamer’s first family dropped him off at the humane society when he was a year old. They probably couldn’t handle his odd food obsessions! Scout came from an “accidental” litter. No surprise I ended up with one of the free kittens – the last one to go 🙂

I don’t consider any of my three to be rescues, really. Beamer was the only one to spend some time in a shelter, but his life was never in danger. It was a no-kill shelter, and he was never in the pound like some of my foster animals were.

This rescuing concept is out of control, and it’s not necessarily helping the animals (although it seems to be helping the humans).

There is something unexplainable about adopting a dog that someone else doesn’t want – it’s something I’m definitely drawn to. But I have to be conscious of what I’m doing. It’s too easy for me to get caught up in the emotions of animal adoption.

Reasons to buy a puppy from a breeder

I can think of plenty of good reasons to buy a puppy from a breeder. Although I’ll probably keep adopting these “hand-me-down” rejects, I can see the benefits to buying a dog from a good breeder.

The main draw to buying a puppy is to help raise that pup correctly from the beginning. Unfortunately, the opposite can also happen. I think we all know plenty of people who have helped screw that puppy up from the very beginning. But that’s for another post …

Some puppies are kept in wire cages for the first six weeks of their lives. Some are isolated in sterile environments. Some are never handled. Some are never separated from their moms. I wouldn’t want to buy any of those puppies.

On the other hand, some puppies are allowed to explore their environments naturally. They are allowed to play in the grass, wrestle, learn to be away from Mom, to interact with all kinds of beings. This is the kind of puppy I would be interested in buying.

I would like to use all my knowledge on dog training, dog behavior and dog nutrition to raise a puppy from the start in the way I perceive as correct.

I would love to begin socializing my puppy from early on, taking her everywhere and training her immediately. Imagine the possibilities!

But can’t I just adopt a puppy from a shelter and get the same benefits?

I would like to know that my puppy’s parents were raised on the highest quality dog food, not over-vaccinated and never covered in toxic products like Frontline.

None of the above would guarantee a perfect dog, but I do believe it would increase my odds.

Notice I’m not advocating buying a pet shop puppy or buying from the nearest breeder just to get a purebred dog. I know plenty of people who have done this and ended up with perfectly average and acceptable dogs.

It worked for them. It would not work for me.

But seeking out the top breeder of a specific breed and waiting for a pup from a future litter, playing a role in the entire process – yes, I can see the appeal to that.

People sometimes buy purebred dogs for the sake of performing specific tasks. It’s sometimes too great of a risk for these trainers to use rescue dogs when the job at hand is some serious work like service for a handicapped person, herding, search and rescue or protection.

These dogs are sometimes selected carefully from breeders of working-line dogs. A true working dog is very different from an average companion dog. Not better. Just different.

I’m not saying a shelter dog can’t make a good working dog – he can. And I’m not saying every dog bred for work will actually be able to perform well – he won’t.

What about breed-specific rescues?

Breed-specific rescues are wonderful organizations. There is probably a rescue out there for every dog breed. This is the first place I’d look if I wanted a specific breed (I don’t).

However, if I wanted a rare breed such as a greater Swiss mountain dog, I may be put on a waiting list for several months or years before a dog comes up that needs a home. Most people aren’t going to wait around that long for an imaginary dog that may or may not be a good fit. And if they want a specific breed, the other option is to find a breeder.

Don’t get me wrong, adopting an animal is one of the greatest things a dog lover can do. It’s just not for everyone, and I’m OK with that.

Most people decide to have their own children rather than adopt or foster a homeless child. I don’t hear anyone complaining about that.

It’s socially acceptable right now to criticize each other about how we obtain our animals. I think that is too bad.

And so I’m asking you:

What do you think about this obsession with animal rescue?

Have you ever bought a companion dog or working dog from a breeder?

Pictured below is my mutt Ace and my mom’s dog, Elsie – shortly after swimming in the lake! Woo! 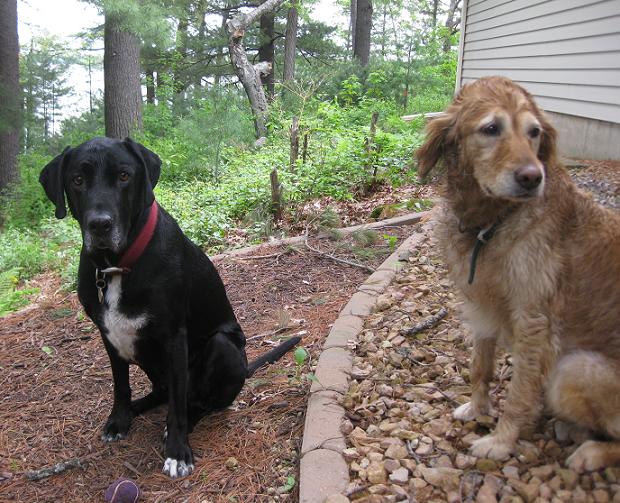