Home » A pack of dogs

No two dogs are alike.

I spent the weekend with five dogs all in one house – my parents’ golden and springer, my grandpa and uncle’s two cairns and my mutt. And don’t forget about the cat, always a good sport.

Five dogs in one house is pretty common for my family, but it’s too chaotic for me to want that many dogs of my own. I admire those of you who do it (you know who you are … Cindy, Lora, Marie …).

With this particular “pack,” each dog has his or her own quirks. The springer loves all attention, good or bad. She wags her tail if she is being scolded. 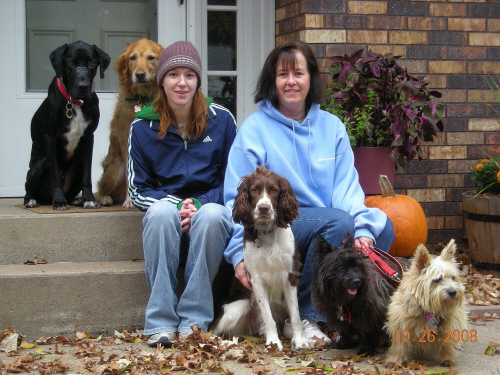 The golden wants to be at someone’s side at all times – she sometimes throws temper tantrums if she is separated.

One cairn is easily distracted. There’s no stopping her if she decides to bark for no apparent reason. The other cairn keeps his owner in site at all times, never wandering too far, except for maybe a cat!

And then there’s my mutt, flinging drool and obsessing on his toy of choice, most recently a rubber ring.

It takes a lot to manage a group of dogs. Anything could turn into a scuffle, although we had none. But it did seem like whenever the cairns were finally quiet, one of the bigger dogs would start in by barking at a neighbor. Or if my mutt wasn’t drooling on someone’s pants or puking up water, the springer was whining to get outside to search for moles or the golden was prancing around with a stolen towel or shoe.

During those rare moments when all five dogs were resting, the cat would sneak by to investigate or purposely tease or even bat a sleeping dog in the face.

There was rarely a dull moment! But we managed “the pack” by setting rules as well as possible. No lunging at food bowls or the door. Lots of positive reinforcement, walks and of course, play time.

How do you manage your “pack?”

(My uncle took the photo of my mom and I with the dogs. Notice the drool covering Ace’s nose!)

Looking after three dogs is quite a handfull at times. Normally they are well behaved as long as they get plenty of exercise. I have a few problems at the moment but that's another story, and a long one!

Love the picture! Multiple dog households are never dull. I totally agree with Lora, management and exercise are vital. I think taking time to train each one individually helps too.

Girl thats a gorgeous shot of you and your mum... and the dogs arent half bad either...lol

Im with you, 5 would be two chaotic for me unless I owned a large property...my brood of 2 and a half is getting pretty hectic at meal times..

Good point Lora, exercise is a huge part of getting any dog to behave, let alone five or six dogs!

Haha, I don't think I'm dressing any animals up for Halloween Mayra. Does Amigo have his costume ready yet?

Thanks Tawna! Not sure if I would call them angels, but they were good, especially for their pictures. And I love Emma.

What a great photo of you and your mom surrounded by five obedient angels! My Emma is an angel too as long as she with submissive dogs in the pack. If a dog wants to hold their own turf then it turns into a bloody fight. I keep Emma out of those situations and therefore keep myself out of those situations. I know its a lazy answer but my stress level is greatly reduced by not having to seperate the dog magnets.