Last weekend I moved from my apartment to a townhome across town. Although it went pretty smoothly, it was still a little stressful for Ace and the cats, not to mention Josh and I. Ace is taking it easy in the pic above with his dane friend Piper who came to visit once we moved in.

Here are some ideas to make moving easier for your dog based on what I did and a few things I should have done:

1. Walk your dog in your new neighborhood before you move.

I realize this isn’t always possible, especially if you are moving across the country. Since I only moved about five miles, I was able to take Ace to his new neighborhood for a nice half-hour walk twice before actually moving. I walked him up to his future driveway, around his future backyard and along the streets in his future neighborhood. I wanted the mutt to get used to the new smells and the new environment so it wouldn’t be as big of a deal when we did move.

2. Stick to your dog’s routine as well as possible while moving.

Your dog will already be nervous when he sees you packing. If you can keep everything as normal for him as possible, it will lower his stress level. Right up until the very day we had to be out of our apartment, I still took Ace out for his morning walk. He still ate at the same times, and we didn’t move his kennel until the very end. That way he could remain in his kennel in its usual spot while we were moving things in and out. A lot of dogs feel safe and are more relaxed when they are in their kennels. It was also nice to have Ace safe and out of the way when we were moving items out. 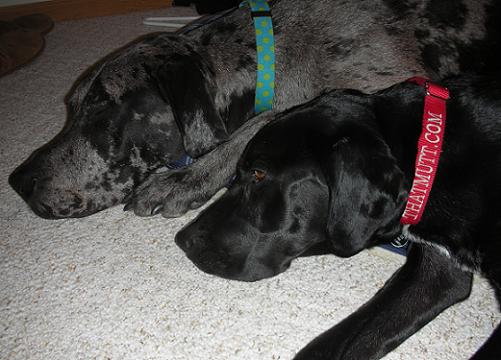 3. Make sure your dog gets a long walk the day you move.

I did not do so well with walking Ace the day we moved. He got a shorter walk than normal and some random ball playing throughout the day. This is better than no exercise, but an hour walk would’ve reduced his stress and helped him settle down for the rest of the long day.

4. Consider boarding your dog for a day or two or leaving him at dog daycare.

I did not leave my dog at a dog boarding kennel or dog daycare in Fargo because I thought that would be even more stressful for Ace. But if your dog goes to daycare every week anyway or if he is boarded fairly often, then it might do you both some good if your dog is out of your way while you are moving. Then you can have everything ready once you pick him up, and it will be easier to stick to a routine.

5. Don’t let your dog run all over like he owns the place once you are moved.

Instead, keep him in his kennel until you are ready to introduce him to the new place. I actually kept Ace in the car until we had moved everything in because he is the most relaxed in the car. Then I allowed him inside but had him lie on his dog bed for 10 minutes. Once he was calm, I allowed him to follow me around on the first level. I did not let him run around sniffing everything. I had him stay at my side, following me. Then we went upstairs, and I showed him one room at a time, making him lie down at the bottom and top of the stairs and sit and stay before entering each room. This was a good way to practice some basic obedience and show Ace that he is expected to follow rules in our new place. It also helped him be calm. After introducing him to the new place I had him continue to stay on his bed for another 15 minutes or so.

6. Enforce your usual rules right away.

Just because your dog is in a new environment isn’t a reason for him to resort to inappropriate behavior. Of course your dog will be nervous, so don’t get upset with him if he is extra hyper, barking more or even going to the bathroom indoors. Just remember to enforce your usual rules. Make sure your dog gets outside more than usual and keep him on his leash or have him lie down on a dog bed or blanket to encourage him to be calm. If he doesn’t get sick easily from raw hides or other bones, offer him something to chew to help him relax.

7. Remember how much your dog picks up on your energy.

8. Use the change as an opportunity to create new rules.

We have been in our new place for about five days and I have already started training Ace not to run up and down the stairs. He is expected to stay behind any people on the stairs. I am also training him to go to the bathroom outside on his own and to return right away while I wait at the door. I also plan on teaching him to go to his bed and lie down whenever someone knocks or rings the doorbell. These are all things I never got around to teaching him at our old apartment.

9. Take your dog for a long walk once you are settled.

I did not do this with Ace, but I should have. The longer the walk, the better. The less pent-up energy your dog has, the easier it will be for him to relax and be on his best behavior.

10. Consider confining your dog to his kennel or a single room when you leave the first few times.

Have you moved with your dogs? What went well and what didn’t?

A person can really tell you care a lot about your pets. I love my dog and I really like your post. Thanks for sharing.

Indeed very helpful. Not too many of the movers are actually paying attention on their lovely pets while moving but yes they are living things too and has feelings that we have to consider each time we are planning to move. I would recommend this article to those who are moving with pets in Florida.

I've never moved with my present dogs, but I've heard stories of cats and dogs going back to the old digs.

Good tips. My dogs were not overly impressed with the moving process. They all did ok and we tried to keep them all together as much as possible. Having their things and our things in the house before bringing them in helped. The familiar smells were there for them and they felt alot more at ease.

I haven't moved with the new addition yet but my lovely old mutt always took moving well. My cat has moved so many times that he always takes it in stride as well.