I’m trying to develop a habit of complimenting people on their dogs’ behavior. Not their appearance, size or breed, but their behavior.

Like with everything else, people are much more likely to compliment or criticize a dog’s appearance rather than her behavior. Just take a Staffordshire terrier to the dog park and watch people back away because they see the “pitbull” rather than the calm, well-trained dog that she is. Or take a great dane out and notice how people gasp at her size rather than appreciate her gentleness.

The number one thing that stands out to me with dogs is when I see one that’s calm and relaxed in public. This is probably because the average dog barks, pulls or nearly strangles herself on walks, trips to PetSmart or any other time she gets out of the house. I notice when a dog is under control, quiet and responsive to her owner. 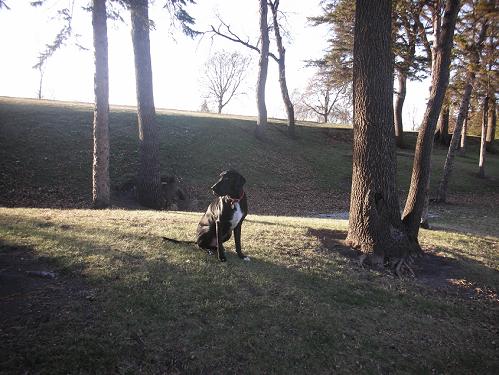 It’s a goal of mine to be able to take my dog anywhere with no issues. So when I see a dog behaving better than mine, I notice. It’s a secret competition. Most dogs I interact with behave a lot worse than my dog, others are much more focused and calm. When I see a dog I admire, the owner has typically put a lot of time into working with that dog.

There’s no better way to learn about animal behavior and training than to speak with someone who has successfully trained a dog to do whatever you want your dog to do. And most dog owners like to hear something like, “That’s a really nice dog you have. How did you get him to stay at your side no matter what?”

People compliment me on how calm my dog is, and it’s a great compliment to receive. But no one ever asks how he got that way. They assume it’s his personality, that labs are easy to train (uh, yeah) or that I lucked out. These people have obviously never seen my dog obsess over a tennis ball or crash through an agility course. They don’t know that it took daily six-mile runs and hours of training to get my hyper dog to relax.

We all know dog owners like to brag about their dogs. It’s what we do. We like to complain about them too, but that’s just another version of bragging. “My dog took and ate an entire steak from the table …”

So, the next time you see a well-behaved dog, tell her owner you’re impressed. Then ask how she got to that point. There’s always more we can learn.

What kinds of compliments does your dog get? What do you admire in other people’s dogs?

Some really interesting points here I struggled to calm down my Spaniel Poppy.Until my my friend mentioned to me a YouTube channel called 'Relax my Dog' which has tracks to help calm and relax your dog. I didn't believe that music could calm her, but gave it ago as I had nothing to lose and it was free :). I was very surprised at the results and Poppy was noticeable calmer and on some occasions fell asleep listening to the music. It's definitely worth a try to see if it works for your dog.

Our peke mix, Stella is either really protective, excited, or scared around strangers. Yet she's so small that everybody thinks it's cute. When bringing her home for the first time, we stopped at a Runnings to get her a bigger collar, and I took her out in the field next to the store to let her go to the bathroom and walk around a bit. We got closer to the store, and she started barking at people. One guy said "She's the store's guard dog! How cute!" No, not cute dude, she would probably rip your leg off if I let her off the leash.

Then when visiting my brother's college, we had her out and she was barking at people passing by. Some guys were "barking" back at her.(Yeah, that helps!) Two girls walked away quickly, one even said "Woah, psycho dog".

Then my brother's friend came over and kicked her for biting his leg when he came into the house(Mind you, she's a 14 pound dog, so she slid across the room). What he doesn't understand is that he just confirmed her fear that strangers were going to hurt her.

She's a wonderful dog everywhere else, with anything else, but just not people she doesn't know. Therefore, I always see dogs that are so well-behaved and honestly, I'm a little jealous. It's difficult, but we're working on her, although she did break skin a little bit on my other brother's friend. Even when we gave him a treat to give to her, she ate the treat and then bit him. The breaking skin may have been due to the fact that he jumped back in surprise, but it's still unacceptable.

It especially stinks when ding dong ditchers who think they're being funny ring the doorbell several times a day. Usually we pick her up and put her in her kennel, and don't let her out until she's calmed down and has stopped scratching at the door.

It's frustrating when other people only add to the problem. People do that with my dog Ace who is nuts about a tennis ball. Instead of helping him calm down, people are very entertained by his obsessiveness and keep talking to him and throwing the ball and getting him excited.

I'm fostering an American Eskimo, and he is scared of strangers and will growl if someone pulls on his collar or reaches at him in a certain way. Apparently the words "Please don't pet my dog. He doesn't always like strangers" are not enough to stop people from reaching at him.

I think the shock collar would work for Ace, I just haven't gotten around to buying one with a remote. He's trained on a shock collar for my parents Invisible Fence.

I have en e-collar (shock collar) for Eli, and even that doesn't stop the whining when he is very excited. Usually the vibrate is all he needs whenever he is off leash, but that nor the actual shock does nothing for the whining. I have tried acupuncture a few times myself and it is great! I will let you know how it goes on the dog.

I agree that the hand over the dog's mouth doesn't work. It maybe works with dogs that are not as anxious.

I think it is a matter of waiting until they relax completely before letting them out of the car. But when Ace is on his worst behavior, we are usually visiting someone or meeting someone or have friends or family along and they are not going to want to sit and wait for my dog to calm down. I have thought of using an e-collar with him but so far I just tolerate the behavior (and get very annoyed).

I wouldn't have suggested acupuncture because I don't have any experience with it. You will have to let me know how that goes.