I have become very picky about which dogs I will foster.

I have no interest in a high-energy foster dog. I do not have the patience for kennel training. I do not have the right set-up for working through dog separation anxiety. I don’t have the energy for a puppy. I won’t take anything that’s aggressive towards other animals, especially since I have cats.

Cosmo Kramer is the perfect foster dog for me (To foster a dog means to provide him with a loving home until he gets adopted). He is by far the easiest foster dog I’ve ever had.

Cosmo is quiet in his kennel. He prefers to lie around the house, and he could care less if I come and go.

He doesn’t bother my cats, doesn’t chew anything, doesn’t try to pee in the house. He gets along great with my mutt Ace. He does not add extra stress to my life.

Cosmo is one of those dogs who doesn’t ask for much. He’s fine with what he has.

I can see that this has worked for and against Cosmo throughout his nine years.

I didn’t get a chance to meet Cosmo’s original owner. I don’t know if Cosmo had an intense bond with this elderly person or if he spent eight or nine years as a very anxious dog – the dog he appears to be now. I don’t know if this person treated him well or treated him poorly.

I also didn’t meet the person who surrendered Cosmo to 4 Luv of Dog Rescue after the owner died. I don’t know if this person tried to make it work living with Cosmo.

What I do know – it’s painfully obvious – is that no one has ever had any expectations for this dog.

But Cosmo has never known what it’s like to truly be a good dog.

The reason for this is that he’s fine just existing. 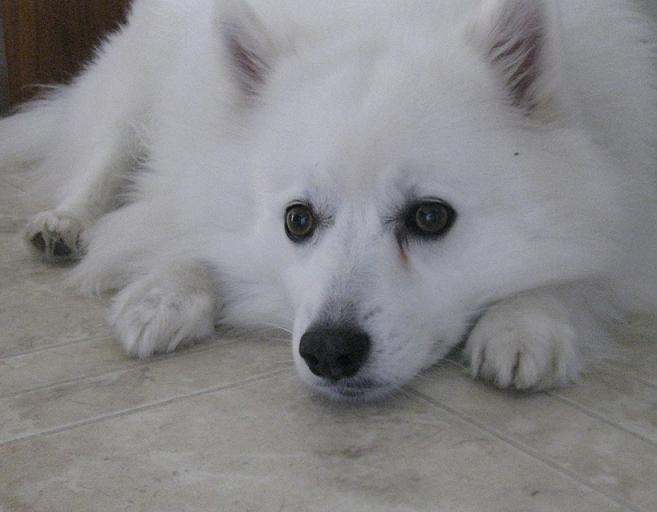 Cosmo naps under the kitchen table or rests in various corners of the house. He doesn’t follow me from room to room, rarely asks for attention, hardly ever barks.

But because he is not needy, I haven’t taken much time to bond with or really get to know this animal yet. I haven’t trained him or walked him as much as I normally do with my foster dogs, and he’s spent two weeks with me already.

On the other hand, Cosmo is an uptight creature.

Physically, he’s lazy. Mentally, he’s nervous (Aren’t we all?). He doesn’t trust me 100 percent and probably never will.

He seems to be a one-person dog, as he was likely an “only child” in his previous home and in many ways, very spoiled!

From what I’ve read about the American Eskimo breed, they are very friendly dogs, eager to please and eager to learn. Cosmo is extremely treat motivated, but he is lacking in the “eager to please” department. I’m assuming he’s never been challenged to learn, so he doesn’t understand the fulfillment most dogs get from making a person happy!

Instead, he just wants treats, and he wants them now! “Bark-bark. Yap-yap. More!”

At nine years old, Cosmo is just now catching on that working for food is not so bad. He expects treats instantly for doing anything, but I am not impressed with a one-second sit. I am, however, impressed with a five- or 10-second sit! Good boy, Cosmo! Yay!

So that’s where I’m at with him. He’s a great dog. He could take me or leave me, probably, but I still love’m 🙂

If you or someone you know many be interested in adopting Cosmo, send an email to Lindsay@ThatMutt.com.

He is up for adoption with 4 Luv of Dog Rescue in Fargo. He is neutered and up to date on shots. (Edit: Cosmo has been adopted!)

Cosmo is kennel trained, housebroken and just fine having the run of the place. He sleeps all day and all night, but he loves to go for walks any time. He doesn’t bark unless he sees a strange dog or person, or if you get out the treats!

He gets stressed easily – doesn’t do well with kids reaching for his face or with anyone who grabs at his collar. He doesn’t want to hurt anyone, but he does growl or snap when he’s uncomfortable.

He is a gentle dog, not “dominant” by any means. My cats pick on him just because they can.

Cosmo needs someone to love him. 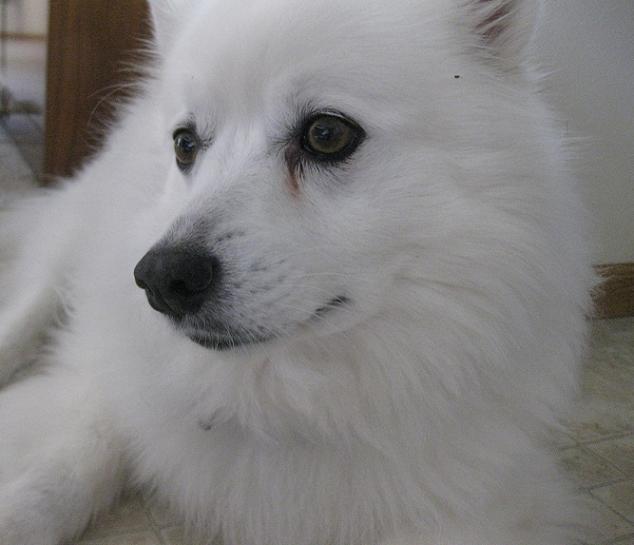 i have been trying to find an american eskimo dog for awhile now. if anyone knows of someone who has one for sale or who is giving it away that would be wonderful :)

Have you checked PetFinder?

I hope he finds someone soon!

Well if this post doesn't generate some interest in Cosmo, I don't know what will. He sounds like a nice dog. Good luck finding him a permanent home.

I met Cosmo at Pet Smart a couple of weeks ago. Jamie had him out there. He didn't seem to afraid of new people when I met him. And he was probably the mellowest dog there. I hope you find him a forever home soon! Good luck.

Jamie does a great job with him! Thanks, Shane!

He doesn't seem depressed to me. I think this is just how he is. He is an independent dog. He doesn't seem interested in having dog friends. He mostly keeps to himself and asks for attention from me every now and then when he wants it.