Home » My dog shakes his body to break from ‘stay’

I want to re-visit the “dog body shake” because I rarely see it discussed anywhere else.

I’m curious, do you think dogs consciously use the “body shake” or the “collar scratch” to break from a stay position? Or, is this always a subconscious thing?

I think most of the time the body shake is a subconscious way to relieve or avoid stress (Oh, back from a walk – phew! Time to relax!). But I think it can also be a behavior the dog learns to use to his advantage to avoid doing something.

What the heck is the ‘dog body shake?’ 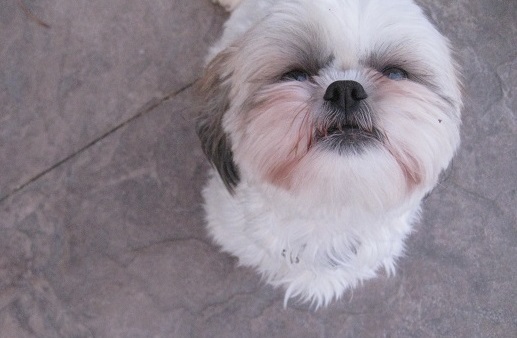 The “dog body shake” is when a dog shakes his whole body as though he’s getting out of the water, but really he’s already dry. It’s often used when a dog is transitioning from one thing to another (done playing, time to relax) or to relieve minor stress (meeting that dog was fun, time to relax).

If you think about it, you probably do you own version of the body shake to relieve some minor stress or to transition from one thing to another. For example, when I reach the starting line of a race I’ll do a little body shake to transition into racing mode. Or, after I return from meeting someone new I might let out an audible sigh which actually involves loosening any tension, almost like a “body shake.”

What about when a dog uses the body shake to break from stay?

The perfect example of this is an obedience class. If you observe the other owners in a class, especially in a beginner’s class, you will see them place their dogs into the sit position when asked by the trainer. After being placed in a sit, it’s almost guaranteed a few of the dogs will scratch themselves around the collar or do a little body shake and pop right back up. “What’s next?!”

I think this reaction is subconscious for the majority of these dogs. They’re still learning what to do. The class environment is stressful or at least exciting to most of them. They may or may not have worked on the sit command at home. They probably haven’t learned that “sit” means “sit and remain sitting until I release you.”

But then, there is always a dog in class who seems to have learned he can control his owner with these moves. For example, the owner will tell her dog to sit, and the dog immediately shakes his body and begins sniffing something on the ground. The owner then waits patiently for the dog to stop sniffing, which could take minutes, and then asks the dog to sit again.

Or, the owner asks her dog to heel, and immediately the dog sits down and dramatically scratches around her collar for a good 45 seconds. Then, as the owner waits patiently, the dog does an Oscar-winning body shake and then decides to heel.

I’m not saying this is downright “deviant” behavior, but to me it’s a pretty clear signal that the dog is saying “I will do this on my own terms. Thank you very much.”

So, if you’re aware this is happening with your own dog and you don’t really care, that’s fine. But if you want your dog to listen to you, then stop waiting around and instead just make it happen.

And the truth comes out. Ace is outsmarting me!

So, what is happening when Ace breaks from a stay position in a low-stress, non-challenging situation by shaking his body and then walking up to me?

I have to say, he’s beating me in chess.

I think he’s maybe a bit bored and definitely testing my limits just like some of those young dogs in beginning obedience class.

To me, it seems like Ace is pushing the limits to see what he can get away with (quite a lot, lately!). As he’s gotten older, he’s definitely learned to ignore me more, and I’ll be the first to admit it’s because I’m much easier on him now than I used to be. I don’t really care when he breaks from stay in the living room.

To do this, he does the body shake and then walks up to me swaying his tail and body in a relaxed, submissive way. I’m sure he’s responding to my expression and body language that says “Oh you did something wrong but you’re cute anyway.” So I’m totally rewarding and encouraging the behavior. Go figure. I’m just being honest here.

Do I want a perfect, rock-solid, obedient dog? Not really. So I’m a little loose with my rules, and my dog knows it.

I want to stress that the majority of the time, the dog body shake is a subconscious behavior due to the dog feeling stressed or overwhelmed. It’s so important to be aware of this so we can either remove our dogs from the stressful situations or help them learn to cope.

For example, my dog will do the body shake at the dog park if he’s being pestered by a younger dog. The younger, higher-energy dog might keep jumping at Ace or nipping at him, and Ace will shake himself off and try to walk away. While a growl or a snap would get his point across better, I appreciate that my dog typically does not resort to growling. I can help him out here by noticing when he’s feeling stressed and intervening.

In this situation, I would probably distract the younger dog or I might encourage Ace to play if it appears he just needs some encouragement. Or, it might be best to just take my dog and walk away, which is usually what I do. If Ace doesn’t seem to want to play, I don’t force him to play.

The more aware we are as owners, the better. I know so many dog fights and scuffles could be prevented if the owners knew to watch for and recognize these “subtle” hints that are actually quite obvious if you know what to look for.

Here is my list of signs a dog is stressed.

But I really want to hear from you on this topic.

2. Does it seem to be a subconscious thing?

3. Does your dog ever seem to purposely decide to do the body shake to avoid doing something?

4. Has your dog ever done the body shake when he’s feeling stressed or overwhelmed?

Let me know! Does your dog shake his body?

I never really gave the body shake much thought. I've never seen Sephi, Maya, or Pierson do it but I have seen other dogs do it. Interesting. It does make sense.

My dog totally does this to avoid heel and other commands. He also snorts when he doesn't want to do something, or when I'm not getting the leash fast enough. Like a little diva.

My dogs only shake as a transitional behavior (done snoozing on couch, break in play, etc).

One of them, though, is a habitual "collar scratcher." I see it as a coping mechanism because it usually shows up in some scenario where he has excitement that he otherwise doesn't know how to get rid of in an acceptable way (yay! I'm going outside for a walk! but sitting here nicely waiting for my leash doesn't let me express that!). It also sometimes shows up as an avoidance to not do something challenging.

Also, it is very clearly habit-forming. There are situations where he plops down and scratches because, hey, that's what he does in that scenario. Dog is "superstitious" and prone to picking random behaviors that he repeats. What's funny is that it isn't really calibrated to the situation - other things might be more exciting that he has to sit nicely for or he'd rather not do them & he doesn't become more likely to collar scratch. So it does seem to be a subconscious habit.

Many instances of what seems like defiance or avoidance - esp in a beginner scenario - are actually confusion or a dog that does not understand what you want or thinks that they can not do the thing you want due to some "bogeyman" that you do not understand in the environment or context. Sniffing around, collar scratching, body shake - these are all also appeasing behaviors as well as avoidant ones. So while there are dogs whose obedience is performed only when they feel like it or on their own terms or time schedule, there are plenty of dogs who get mislabeled unfairly. It's so important to understand your dog. A dog who just wants you to tell him what to do and I'll do it and make you happy oh please oh please!!! may show the same behavior as the dog who thinks he's so gracious to let you join him for his sniffing tour of the outdoors and he'll get back to you when he's done, thank you very much.

In other words, there is a difference between the dog who is really stressed and nervous to be around all those other dogs in class & geez, they "know" heel but it hasn't been repeated the thousands of times necessary to become a default behavior & eventually gets around to it, and the dog who knows heel cold but has learned that there isn't very much reward in doing it immediately/perfectly anyway and doesn't really feel like rushing for no reason that he can see. They key is knowing which situation you have on your hands.

My dog does a lot of the collar scratching as well when he's unsure of what to do. Mostly, he does this when my cats are picking on him! They will block him from a certain part of the room, and he'll just sit there and scratch himself.

Great point about how important it is to know and understand your own unique dog. They are all so different, and I hate to think of a dog labeled as "disobedient" simply for being confused or overwhelmed. My dog definitely will scratch himself when I'm not being clear on what I want him to do. He is very sensitive and does not like to make "mistakes." That's my cue to lighten the mood a bit, make things easier and praise him.

My dog does the body shake as a transition mostly it seems--getting up in the morning, before he walks to his bed at night. He'll often do it when we come back from a walk. I wouldn't say I notice it when he's stressed, although I'm definitely going to be watching more closely now. The behaviour I'm seeing more of is the "I'm going to do this on my own terms" laziness. The ambling come, the sit for 5 seconds before I go look for something more interesting. Most of the time it doesn't matter, but I know I need to be more consistent so that he'll do what I need him to when it does matter.