I believe a raw dog food diet is the healthiest diet for most dogs.

However, switching a dog to homemade raw dog food is an overwhelming process, and sometimes it helps to learn from someone who’s been there.

I interviewed blogger Rebekah Ward of My Rotten Dogs on how she feeds her three dogs a raw diet.

That Mutt: Why did you decide to start feeding your dogs a raw diet?

Rebekah Ward: We had constant GI issues with Neeko (she was our first). She was riddled with worms when we got her, she was “free to good home” from an “oops litter.” We fought worms with her for several months, then when she was about five months old she contracted Giardia. That was fun. She had a bought of gastroenteritis at about 10 months old.

Once all of that cleared, she would still have diarrhea on a regular basis and couldn’t keep weight. I was worried about Exocrine pancreatic insufficiency because of her German Shepherd Dog heritage. I dabbled a bit with some commercial raw when is was just her, Nature’s Variety and Primal, but never exclusively.

We adopted Bruce, and while he didn’t have the GI issues Neeko did, he had soft, mushy poops on various high-quality kibbles. He had his first normal poop the day after I fed him and Neeko each half of an oxtail for dinner. At that point, I began feeding half raw, half kibble. I would give raw for breakfast and kibble for dinner. I fed that way for about four months before switching to full raw.

TM: Would you feed the same diet if they were not wolfdogs?

RW: Yes. A friend of mine feeds her working bloodhounds raw. They shine. Another friend of mine has a GSD whose parents are both from Europe. She also flourishes on it. I believe it is the ideal diet for most dogs.

TM: Did you have any concerns when you first began feeding raw?

RW: I was so nervous about cannon butt! I fed bone in every meal several weeks. Bone firms up the stool of a raw fed dog. Some dogs require a little bone with each meal, all dogs are different.

I was worried about properly balancing it, which is why I fed half kibble and half raw for a while.

I was worried I wasn’t feeding them enough, or too much. I was worried about enhanced meats, meats that have a broth or sodium solution added to them for flavoring, thus driving up the sodium content, which can cause diarrhea in dogs.

TM: What are some ways you save money on raw food for three large dogs? 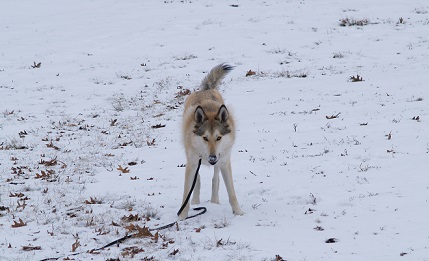 RW: I belong to a local coOp, www.rawpaws.org, and purchase in bulk, which drives down the price per pound. I have friends and family who hunt and share the wealth with me, and who also contact me when they have freezer burnt meat.

I shop markdowns, managers’ specials, etc. A local grocer, Marsh, has their pork butts and shoulders on sale for $0.99 to $1.29 per pound about once every 4 to 6 weeks. When they do, I stock up.

TM: Where do you get most of the “meaty meat” for your dogs?

RW: Beef heart is one of my meaty meat staples. I can get it through my coOp, from a local butcher, at Meijer or Walmart, and at a local ethnic market. The cheapest place is about 35 miles away, a meat processor, where I can get a 60-pound case of beef heart for $0.89 per pound.

I feed venison as often as I can get it.

Turkey hearts and turkey breast chunks are available through my coOp most of the time, for $ 0.69 to $1.10 per pound.

I am also a big fan of green tripe for meaty meat. I order it from the coOp and from wwww.mypetcarnivore.com. My Pet Carnivore is a local raw feeding company with phenomenal owners and excellent products. Some of their stuff can be pricy, but I splurge on them every once in a while. As mentioned above, I stock up on pork butts and shoulders when Marsh has them on sale.

TM: Where do you typically buy organ meat?

RW: I get the bulk of it from Raw Paws or My Pet Carnivore. MPC occasionally has exotic organs, like ostrich and bison liver, which I order when I can. Raw Paws regularly has pork, beef and sheep liver for right around $1.00 per pound.

I also regularly order beef and pork kidneys, and goat and lamb spleen from Raw Paws, all for $1.25 per pound or less. I go through about 8 to 10 pounds of liver, and 8 to 10 pounds of “other” organ per month.

TM: Do you ever receive criticism for feeding your dogs raw? What is your typical response? 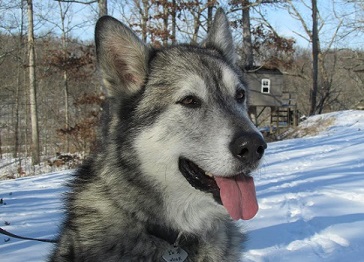 RW: Honestly, no. My vet is supportive of it (love you Dr. Baker!), and most people are just curious about it. I have yet to run into someone who gave the “you are killing your dogs” speech.

TM: Is there anything else you think people should know about raw feeding?

RW: If you are feeding large or multiple dogs, buy a dedicated freezer. It makes purchasing in bulk easy. One doesn’t have to run out and purchase a brand new one for several hundred dollars. They are readily available on Craigslist. I have a 14-cubic-foot upright that was spotless and three years old when I purchased it for $100 from Craigslist. I have a 7-cubic-foot freezer that was slightly dented but clean and perfectly functioning that I purchased for $50 from Craigslist.

Do research. There are multiple ways to feed raw, and I am a fan of all of them. Kibble supplemented with raw, half and half, premade/commercial raw, dehydrated raw (Sojos, The Honest Kitchen, etc.), BARF, the list goes on.

Figure out which style works best for you and your dogs. If it is not easy and enjoyable for the owner, it will likely be given up on. In my opinion, some raw or fresh/homecooked food is better than none.

What questions or advice do you have about feeding a dog a raw diet?

I've been casually looking into raw but only have a 15 lb dog. He goes through 4-5 lbs of good quality dog food a month. I can understand how you can save money with a big dog but not for a smaller one. Do you think going raw is a better deal for large dogs?

I think it just depends on what you're currently feeding, and what type of raw food you switch to. The pre-made, commercial raw diets are never going to be more affordable than a high-quality dry food. However, if you buy the meat yourself, you can save money, regardless of what size your dog is. It's a matter of buying meat on sale, finding deals through co-ops and butcher shops, etc.

Here are some tips for saving money on raw food, not that I necessarily do all these things: http://www.thatmutt.com/2013/01/19/affordable-raw-dog-food/

I was wondering: how much does raw feeding cost (assuming buying in bulk for 2 100lb dogs)?

It really depends on how hard you want to work to find good deals on meat. I only have one 70 pound dog and I spend about $120 per month to feed him raw, and that's because I don't stock up during sales. Some people spend half as much as I do.

I want to go raw. The more and more I've heard and read I totally want to do it. But right now I just don't have the time or freezer space! Thank you for finding and telling us about all different types, sources to get meat and how to do it. Maybe start adding a raw meal into their diets since we do feed a high end kibble. Thanks for all the information!

Even if you did one raw meal a week or so, that would be a less-overwhelming way to start.