Home » Why my pets are not rescued animals

You will never hear me referring to my dog Ace as a “rescue.”

I understand many of you view your own animals as rescues, and that’s OK. It’s just not a word that sits well with me because it dwells on a dog’s past rather than the present. If you know dogs, then you know they have an incredible ability to move on and live in the moment. We humans do not always have that same gift.

For example, a man called me last week to see if I would be able to walk his two Lab mixes while he and his family went on vacation.

I’d have the neighbor kid do it, but my dogs are rescues, he said. You know how rescues are. They need someone with experience.

No, I didn’t know that’s how “rescues” are, but of course I didn’t say that.

It seems to me this term “rescue” is used as a bit of an excuse for our dogs’ inappropriate behaviors at times.

I truly do not think of my dog as a “rescue,” so I’ve never used that label as an excuse for his behavior – and he misbehaves plenty. 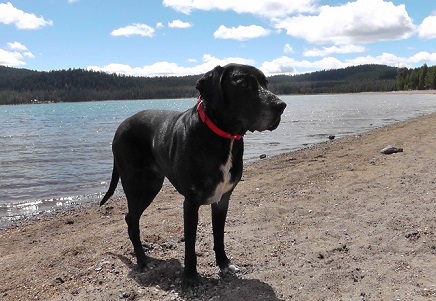 When Ace was a year old, I was the first person to take him for a walk, and he was terrible – pulling and choking himself on his chain collar.

I remember a man walked by us at Gooseberry Park with a smaller dog, and Ace was very much out of control.

“Yikes” was all the man said. Not because my dog was aggressive, but because he was pulling so hard.

I felt bad about my dog’s poor manners.

So, I worked on it, and Ace and I progressed quickly – thanks to a dog backpack, a gentle Leader and a prong collar. He passed his Canine Good Citizen test six months later, a test where the dog must successfully do things like ignore an approaching dog and keep to himself in a crowd.

My dog is a lot of things, but my dog is not rescued.

Labeling him that way would be unfair. His life was not that difficult before I had him, just different.

Many people assume that because my dog is black and “mixed” he must also be “rescued.” He’s not.

“Bless you,” a woman said to me at a community dog event. All I’d said was that Ace was a “Lab mix.”

Sure, some of us have literally rescued animals. We’ve pulled them from the streets or from high-kill shelters.

I picked up three cats from the pound, marched them right from their cages to my car and took them home. This was when cats had a 50/50 shot of making it out of that pound alive. There are few feelings as great as saving an animal in that way.

But when I think of those cats today, I don’t think of them as “rescued.”

Ninja, Nikita and Rita are all living lavish lives with friends and family of mine now. Never missing a meal. Lounging around on beds. Running the house, I’m sure of it.

Dwelling on “rescued” does not seem appropriate or accurate.

My own cat Beamer was adopted from a humane society, and he is by no means a “rescue” either.

He survived winter nights outside in Moorhead, Minn., by hunkering down in window wells or by whoring himself out to the neighborhood cat lady.

He did not have to be outside; it is what he wanted.

Beamer had a boneyard under the deck where he drug most of his “kills.” He came inside when he wanted to, on his terms. Then left.

Today Beamer is kept indoors, and he remains a lover, a hunter, a fighter and a snuggler.

He has scuffed-up ears and a scar by his eye.

Rescued? Not a chance.

Do you consider your animals “rescued” animals?

I think there is another dimension to "rescued" that this article never mentions. My last dog was a shepherd terrier mix who was wandering in my neighborhood, sick and thin. To give her a job for her energy, we started obedience, then went on to agility training. My dog did train much more slowly than the other dogs we started with, and there were some things a typical dog could tolerate that she would not. Stepping on her leash to keep her in a down totally alarmed her. Doing an exercise where the trainer held her collar for a minute while I ran away (to build enthusiasm) made my dog avoid the trainer for the rest of the classes. She eventually became an agility champion but I had to train very carefully and do things my own way because many of the usual techniques didn't work well with her. I am glad that many dogs are resilient, but some need some special care when training to bring out their best. So I disagree that a dog's past is irrelevant. On the other hand, many dogs from tough situations end up doing very well, if their person is able to give them the patience and attention they need. But it can take a long time!

Our New Puppy - Choosing to Buy A Weimaraner Dog From A Breeder | Thatmutt.com

Very interesting perspective Lindsay. My dogs and my friends' dogs are "rescues" and I never thought it meant a whole lot. To me, it was just a minor descriptor.

Wonderful post! I take care not to call the dogs rescued (despite being high-kill shelter dogs). Gosh, I'm even a bit antsy about calling them adopted. I think it's because so many people stress the "he's a RESCUE!" "She's RESCUED!" type thing, like it puts them on a new level or gives them special worthiness status. I think it's great, yes. Heck, I volunteered in the high kills and nothing turned my stomach more than walking by that freezer. But I'm also not against responsible breeding, and I hate thumbing a nose at those dogs who come from those valid/great places too and the tough low-paid work a responsible breeder does for the breed and dog behavior as a whole. Responsible breeding isn't something to thumb a nose at - balanced dogs bred for temperament (not looks) keeps dogs out of shelters, as they tend to stay in homes. I just don't want to do a disservices to those folks. So I tend to go with adopted too.

So glad you liked the post and that you can relate. Come to think of it, I tend to avoid "adopted" as well. I usually just say I "got" Ace from his previous owner.

Actually, come to think of it, I call them shelter dogs a lot but mostly just "Mort" and "Tig". But right now they're both "fly enthusiasts" destroying my townhouse...

"Rescue" is not such a popular word over here, I think. I use adopted because we did adopt from a shelter, sometimes I also say she was a shelter dog.