Have You Ever Picked the Wrong Dog Breed?

Home » Have You Ever Picked the Wrong Dog Breed?

Have you ever picked the wrong dog breed?

I love my new Lab puppy, but I think it’s normal for people to have some “what have I done?” moments when they get a new pet.

For example, when I got my weimaraner puppy 5 years ago, I was shocked by his energy even though I did my research.

Turns out, nothing can prepare you for a weim unless you’ve had one before. I even wrote an article, “When you regret getting a puppy.”

Remy was such a contrast to my easygoing, senior Lab mix at the time. Ace was an “old soul” even as a young dog.

Today my weim “puppy” is 5 years old and still more active than most 2 year old dogs.

And even though Remy’s energy is still overwhelming at times, he is my perfect ultramarathon partner and canicross dog. I’m proud that he can run 18 miles on the trails one day and be ready to go again the next.

He’s a fairly fast agility dog and his goofy personality keeps everyone smiling.

He’s “perfect” in his own way.

And then I look at my sweet Lab puppy and think, have I picked the wrong dog breed?

Is this dog too “calm” for me?

Will he even try to do agility?

Because he seems like more of a couch potato. Maybe a “weekend warrior” who takes on a leisurely Sunday hike. (And no, I’m not trying to run with a puppy yet, for that one person who’s going to freak out.)

I did a lot of research when I chose a field bred Lab. I went back and forth between another pointing breed like a vizsla or going with a less “intense” sporting breed.

I chose a Lab who I thought would be athletic, but not “off the charts.”

I wanted a Lab that could run at least 5 miles, maybe 10 occasionally, I told our breeder. No problem, she said. All of our dogs are so athletic.

She helped me choose a specific puppy from specific parents who were especially athletic with impressive sporting accomplishments. “Fire-breathing dragons,” she called this litter, compared to some of her “calm” Labs.

I’m not saying I picked the wrong dog breed. Little Rip is still a baby. And I did name him after my favorite calm and loyal Yellowstone character.

But man, I’m used to weimaraners, and this little Lab takes “laid back” to a new level.

I remind myself how my weimaraner’s energy stresses me out. Like, a lot.

Remy spins and “yodels” in the car on the way to trails, and it’s really freaking annoying.

He’s also uncontrollable when someone comes to the door. And he’s always pulling on the leash; never not pulling.

At agility practice and trials, if there’s a light wind he gets scared and becomes unable to work.

He’s just AMPED much of the time, high strung.

Puppy Rip is none of that.

Rip falls asleep in the car. Every time.

He happily greets people and then disengages once he’s had enough.

He observes the world, thinks things through.

He eats his food slowly and delicately.

He has to sit and think about if he wants most treats or not.

If I put his dry food in a Kong, he’ll bump it around a bit. Anything beyond that is just too much work.

On walks, he’s not afraid of anything, but stops and looks at me, like, what is the point of this? Perhaps, we could just go back?

He’s especially excited if I carry him. Licks me in the face to say, “Oh, you are just the best!”

But … he’s still a puppy, 3.5 months at the time of this writing. He does get the normal puppy “witching hours” once in the morning and once in the evening where he tears around like a psycho, biting the air.

Beyond that, I’m still waiting for the “teenage energy” to emerge.

Remy and I probably need a little more “calm” in our life and that is what Rip is here for.

When I was 23 I adopted the absolute best dog for me – a laid back Lab mix who gladly slept all day while I worked 10-hour shifts.

Yet, he would also run right at my side at my medium 10-min per mile pace. Very slow for some dogs; the perfect rhythm for Ace.

He changed the course of my life, helping me start my own dog walking business, running thousands of miles at my side and leading me to start this very blog.

Ace was a good, old boy. The best.

And then came Remy.

Remy forced me to up my training game and work harder because he is not a pushover.

He’ll nip if he disagrees or if I pressure him too much. He’ll ignore me when he wants, which is frequently. So I have to put in real effort to be a fun, “team captain.”

He’s competitive like me, and I think we push each other in a good way.

Life with Remy is humbling, and maybe I needed that.

I went from having the most obedient dog in the group to having a “questionably” behaved dog. Remy is not a bad dog, he’s just a bit more “challenging.”

Remy loves me very much, just not quite as much as he loves himself.

It’s nothing personal. That is just Remy!

Time will tell who he becomes and how our relationship develops.

I can tell he’s a lot like Ace – calm and gentle and thoughtful. A sweet boy!

I never believed I would be so lucky to have another dog even half as perfect as Ace.

But Rip seems like he’s just as “bombproof.” Maybe more so.

He’s already the type of dog I can take anywhere and trust that he will just “be.” A good patio dog. Yep, he falls asleep! A dog who will relax on a boat and just appreciate sniffing the breeze. A dog I can leave with a friend and not worry that he’ll be an anxious wreck.

The type of dog who makes me look like I know what I’m doing.

Remy and I will still collect our agility and canicross titles and our race medals.

Rip can tag along if he wants.

A slower agility dog might be nice, not to mention a dog who actually trots at my steady pace instead of hauling ass all of the time.

After Remy and I have crashed up and down the trails, we can guarantee our little buddy will be ready to curl up and relax on a Saturday afternoon.

This is what dogs do.

Every dog knows to truly appreciate the moment. So, I will take a lesson from these dogs I’m lucky to have and that is what I will do, too.

Their lives are just too short.

Every day with a dog is special. So we will make the most of our time.

Have you ever wondered if you picked the wrong dog breed?

And of course, sometimes if you adopt a shelter dog, you really have no idea what you’re getting.

Let me know your experience in the comments.

Lindsay Stordahl is the founder of That Mutt. She writes about dog training and behavior, healthy raw food for pets and running with dogs. 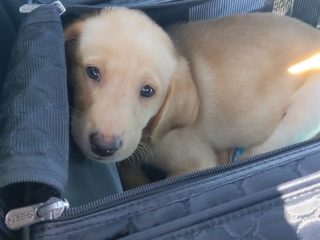 Previous
How to Fly With a Puppy 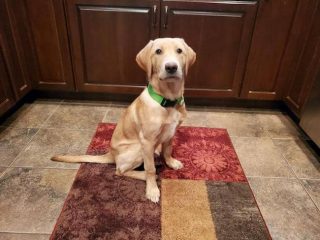 Next
How It's Going With Puppy Rip!
Click here to cancel reply.

I think you got my dog and I got yours. Elsa is very high energy. She can play non-stop for 3-4 hours straight. I don't run with her, but I bet she could easily run 5-10 miles. One of my guide dog friends puppy sat her for a weekend. When I picked her up my friend said she is the highest energy Lab she's ever seen. That says a lot considering my friend has puppy sat hundreds of Labs. Elsa is also very sweet and smart. She's a little over 1 year old now and has learned to calm down when I'm sitting at my desk trying to work (she's at my feet as I type). All that being said after following Remy, Elsa is not nearly at his level of energy. Rip is adorable. I hope we get to meet him and Remy someday.

They are all so different. Remy never took naps unless I crated him. Rip takes at least 4 or 5 long naps every day wherever he happens to be. He walks a slow 15 mins and he's good. Remy was already marching 3-4 miles+ no problem every day at this age.

I think there’s a measure of truth to “you get the dog you need.” In the case of my first dog, she was a near perfect match to what I wanted at the outset plus everything I had no idea I wanted. I could have ordered her off a menu, she was so close to my ideal. And although she was a challenging puppy, she made me look like a fantastic handler when she reached adulthood. She also tried everything I wanted and we both loved the sport we settled into. And she was good enough at it to be an absolute joy to handle, even if she wasn’t taking high in trial. She was the dog I needed starting out.

Contrast that with my puppy, who is nothing like I expected and exactly the puppy I needed when I was trying to juggle socialization and training with caring for a sick and dying dog. He was able to make do with what I had to give and showed up in all the right ways. He’s been challenging in other ways, but he has a lot to teach me, and he’s pushed me to rise to the challenge of working with a very different kind of temperament. I’ll be a better handler and better partner for having worked with him.

She really was the perfect dog for you. And your new guy handled everything so well. That's how Rip is so far with socialization and early training. I'm fortunate to have the time to work with him but honestly I'm able to slack off a bit since he's so easygoing and not fazed by anything. So far.

I should note for those who don't know that both of my dogs are/were German Shepherds, so it's not quite the "did I pick the wrong breed" question. They're even fairly closely related (the analogous human relationship would be first cousins one generation removed). They could not be more different, though. Even pretty standard German Shepherd traits manifest differently and to different degrees.