I’m looking for some ideas on how to stop my dog from begging for his own food before it’s time for them to be fed.

I feed them twice per day.

The only tips I could find on this are about how to stop a dog from begging for a person’s food. If you have that problem, I recommend teaching the dog to stay on a bed.

But I’m hoping some of you can chime in on how to stop a dog from begging for his own food, because I’m guessing it’s a fairly common problem. And oh so annoying!

Here’s my problem. Can anyone relate?

The evening routine is where it’s bad. I’m usually at my desk writing around this time, and my cats start harassing me any time after 2:30 p.m.

Scout, the quieter cat, starts dramatically sneezing at about 3:30. Then, if I so much as sit up straighter in my chair, they both make a mad dash to their food cupboard and really start meowing then!

My Lab mix Ace is the least annoying. He starts begging around 4:30. He starts shaking himself, scratching himself around the collar and sometimes whining.

If anyone can give me ideas on how to handle these three, please help! 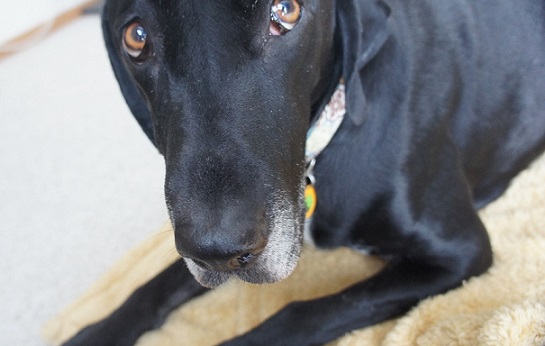 1. Ignore the whining, barking or meowing.

The most common advice is probably to just ignore the dog (or cat) and feed him on your terms once he’s calm and quiet.

This works pretty well with dogs because you can usually train the dog to stay on a bed.

But oh … those cats. The more I ignore them, the louder they get.

2. Put the dog or cat into a kennel or another room.

If your dog begs, you could put him in his kennel/crate or in a bedroom with the door closed. You could also give him something to do like chew on a Kong toy filled with treats.

This has been my “solution.”

If Ace is being annoying, I put him in my bedroom until I’m ready to feed him. When my cats start begging, I put them in our bathroom and close the door.

The problem is, my cats just keep meowing the whole time, which can be up to two hours. They’re eventually “rewarded” because I have to feed them at some point.

3. Feed the animals once a day.

I’ve tried feeding my pets once a day, and it does help. They eventually realize they’re only getting fed once, so they do stop begging for the second meal.

The problem is, my cat Scout does seem to need to eat twice a day. If he eats it all in one meal he tends to throw up. So … of course the others start begging if they see me feeding Scout a second meal.

I do this every now and then. If they are all calm and quiet around 3 p.m. by chance, sometimes I just feed them before the madness begins.

5. Just give in and feed them when they beg.

I do feed them sometimes as soon as they start begging, mostly because it’s less stress than dealing with 2+ hours of begging.

6. Move the feeding time to later.

I’ve thought about moving the pets’ feeding time to 9 p.m. They’d really be mad for a few days, but they’d eventually move their begging time to a little later, probably around 6.

7. Use an automatic feeder.

This is the best solution I’ve found for cats, and I could see it working for a small dog.

We have a timed, automatic pet feeder for Beamer. When it’s set up, he sits and waits in front of it for hours instead of harassing me.

The only problem with the feeder is he’s able to reach up and grab food out of it, and then he starts to gain weight. So if we use it, I have to let him get fat or I have to manually measure his food and put it in the feeder each day. This isn’t a big deal, but then he starts harassing me again vs. waiting at the feeder.

I could buy a higher-quality feeder.

8. Squirt the dog or cat with water for begging.

Sometimes I use a water bottle to squirt my cats when they beg. Boy is that satisfying – “Got you good, you F—-ers!” But it’s not enough of a deterrent. They just run away for 30 seconds and then come back.

This might be a good option for some dogs and cats, but not mine. There is also a product called the Pet Corrector, which a reader told me she uses for her dogs sometimes (thanks Dana!). It shoots air at the dog, which most dogs don’t like.

9. Leave food out all the time (free feeding).

This may be the best solution if you have only one pet, but it won’t work for our home for all sorts of reasons. They don’t all eat the same food, Beamer would eat everything in sight, and they would fight.

OK … so those are my ideas, and as you can see I haven’t really trained my cats not to beg. I manage my dog by rewarding him for lying on his bed, but my cats are complete terrors.

Does anyone have any ideas I could try?

How to keep a dog calm before meals

I swear my dog has a built-in alarm clock. She normally doesn't come and get me if I feed her on time or a little late, but she definitely gets demanding and lets me know if I'm late. I actually think it's pretty convenient so that I don't forget.

I honestly can't believe some of these comments! Dogs and cats get hungry just like we do. I give my dog a few steamed veggies and a kong during midday, and then he is hungry for dinner. I would try a midday treat and see how the do. The begging could be trolling you that they're hungry. (I would be hungry eating nothing since breakfast)

First take your pet for a walk or park visit. Then put fresh food out in a bowl and ask them to wait till you have put it down . Only feed them after they have done a good activity. Twice a day..morning and dinner time. Our dog instinctively behaves as she knows she is getting her food and when. I am consistent and reliable and refuse to feed her under the table. Of course meals are not a treat. They are a reward and are a basic need which needs to be met. I always tell her she is a good girl and stroke her for being good.

We feed our cat twice daily and this seems to work well. Her bowl, of course, is kept out of dog reach. Usually she doesn't eat it all at once, but nibbles off and on. If her bowl is empty she generally doesn't beg, but does once in a while in the morning if she thinks I'm slow. She comes running instantly every time she hears me feeding the dogs. Our golden never begs unless prompted by our springer. Our springer is definitely a big begger and gets worse the closer it gets to meal time. She's quite food obsessed. Mostly, we just ignore her. It is annoying at times, but it's also amusing. Sort of. Eating is definitely a main highlight time of day for all our pets. Understandably so I guess.

Luckily Laika doesn't beg for her dinner anymore, but it really wasn't much of an issue with her to begin with. I wish I had some advice, but from growing up with a cat I know how relentless they can be and it's something I hear quite often. Cats waking up their owners at all hours of the night because they're hungry... They're quite persistent.