It’s early in the morning. Your dog needs to go to the bathroom. You open the back door and he dashes out to the fenced yard. You head to the kitchen to put on the coffee.

Not so much if you live in rattlesnake territory.

For many dogs and their owners, a simple backyard bathroom break can be a hazardous excursion with serious threats from lurking rattlesnakes.

This is where rattlesnake avoidance training for dogs comes in

The concept of rattlesnake avoidance training is to prepare your dog to avoid snakes by his own choice. The training involves exposing your dog to snakes and conditioning him to run away when he senses a snake.

One training method uses e-collars to create a negative association with rattlesnakes.

Another training approach uses scent, sight and movement of the snakes to trigger the dog to move away from the snake.

Rattlesnake avoidance training for dogs without shock or e-collars

Approximately 150,000 dogs and cats are bit by rattlesnakes every year (just 0.19 percent of the estimated 78 million dogs in the U.S.). Most bites occur in the dog’s own yard.

Jamie Robinson teaches snake avoidance training without e-collars or “aversive stimulus.” An e-collar is an electronic collar that may have a tone-only setting, a vibration setting or correction setting.

Robinson explains that her training is focused on teaching dogs to run away “when they smell that smell, see that shape or movement, or hear that [rattling] sound.”

It helps that many dogs avoid snakes instinctively.

“In all the testing I have done, about 70 percent of dogs don’t like the smell of a venomous snake and will move away from it,” says Robinson. She taps into this natural behavior.

She breaks her snake avoidance training for dogs down into four steps:

1. Commit to the scent/sound/movement. The dog is introduced to the smells, sounds and motions of snakes. The dog should be leashed at a safe distance from the snake.

2. Run away. If the dog voluntarily moves away from the snake, he gets a reward – food or a toy. Robinson emphasizes that she wants dogs to run away not with fear, but with purpose and understanding.

3. Pair the scent/sight/movement with running away. Eventually the dog learns to disengage whenever he smells, sees or hears a snake.

4. “Proof the heck out of #3 so the dog does it every time without fail.” Training becomes more challenging until situations are as close as possible to real-life.

Carl Persons is a herpetologist who has worked with snakes since 1976. By using e-collars and live snakes, he builds a negative association for dogs with snakes.

Using an e-collar is the most common snake avoidance training for dogs used in the U.S.

The first step in Person’s course is to introduce the dog to a rattlesnake. When a dog approaches the snake to smell it, Persons triggers the e-collar.

He notes, “Shock sounds like we are hurting the dogs. We keep it low enough that most people can’t feel it.”

Cody Will, owner of Rattlesnake Ready, explains that a low level of shock is sufficient to teach dogs to stay away from snakes.

“We start at zero and work upward until the dog responds appropriately. It is completely unnecessary to shock a dog with a max level correction.”

It is important that the dog is focused on the snake before triggering the e-collar. This will build the association between the snake and the correction.

If the dog is simply near the snake, but not paying attention or not aware, the e-collar will not be an effective training mechanism.

Persons, Will and Robinson all use a variety of scenarios to ensure dogs are protected for as many scenarios as possible.

Persons said it is essential that dogs are trained for sight, sound and scent.

“We want to see them lick [their noses] and look,” he explains. “Sight and sound mean nothing if they are running through a field and step on [a snake].”

All of the trainers emphasize that no snake avoidance training is completely infallible, but they have developed their programs to be as effective as possible.

What is the cost of a vet bill for a dog’s rattlesnake bite?

If your dog is bitten by a rattlesnake, he will require IV fluids, pain medication and antivenin.

Antivenin (commonly called antivenom) is notoriously expensive in the U.S.

Therefore, vet treatment for a rattlesnake bite can easily cost you thousands of dollars.

How much does rattlesnake avoidance training for dogs cost?

How to prevent your dog from getting bit by a rattlesnake

Most rattlesnakes avoid humans and dogs and only bite if they feel truly threatened.

Rattlesnake bites are most likely to occur in the dog’s own yard.

Therefore, make sure your home and property are not snake friendly.

Snakes like to hide or burrow, so keep grass mowed, remove rock and firewood piles, and plug any holes you find in the ground.

Snakes eat mice, birds and other small rodents. Do not install bird feeders or other food sources that can attract a snake’s prey.

When hiking, avoid long grass or rocky areas. Don’t let your dog investigate holes or dig under rocks. We love off-leash hiking, but consider keeping your dog on a leash in snake territory.

If you’ve not gone through rattlesnake avoidance training, “leave it” or “come” are also helpful commands if you encounter a snake.

Rattlesnakes are most active in warmer months, usually between April and October. Use extra caution during this time.

If you see a snake or hear rattling, remain calm. Move away slowly and give the snake space to get away.

Watch how your dog reacts to his surroundings. You can often tell if he smells something unusual. Through snake avoidance training, you can make sure your dog knows what to do when he senses a rattlesnake.

Does the rattlesnake vaccine for dogs work?

There is a rattlesnake vaccine that claims to help protect your dog against rattlesnake venom. The manufacturer, Red Rock Biologics, says that dogs “experience less pain and have a reduced risk of permanent injury from the bites.”

The vaccine does NOT make a dog immune to rattlesnake venom.

Even with the vaccine, dogs who are bitten by rattlesnakes require immediate medical treatment. The vaccine is simply a “boost” for your dog’s immune system and hopefully gives you extra time to get treatment. This is especially helpful if you tend to hike or backpack in remote areas, far from cell service.

Dogs need to receive the rattlesnake vaccine at least 30 days before any potential exposure to rattlesnakes. They also need a booster shot every six months!

There is limited data to prove whether the vaccine is effective.

A 2014 study found no significant difference between survival rates of vaccinated and unvaccinated dogs.

Another study tested the effectiveness of the vaccine in mice. Researchers found that the rattlesnake vaccine “improved survival rate and survival time… with WD [Western Diamondback] rattlesnake venom,” but not with venom from other species.

A challenge with the vaccine is that rattlesnake venom varies between species and even within species. The rattlesnake vaccine was developed to protect against the Western Diamondback Rattlesnake.

What to do if a rattlesnake bites your dog

Thankfully, rattlesnakes rarely bite. However, the will bite if they they are provoked or threatened.

Venomous snakes bite 7,000 to 8,000 people in the U.S. each year, with rattlesnakes being the most common, according to Wikipedia.

With quick treatment, the bites are seldom fatal. About five people die from snakebites in the U.S. annually.

If you or your dog is bitten by a rattlesnake, get to a hospital or veterinarian right away.

If your dog is bitten when you are in a remote area with no cell service, do your best to carry your dog out as quickly as possible. Do so even if it’s going to take you several hours to get back to your car. We recommend you carry a satellite phone for emergencies.

Call the vet as soon as you are able. Alert them of the situation and make sure they have antivenin treatment. If a vet gives your dog antivenin treatment within two hours of the bite, the probability of recovery is greater than 99 percent.

Dogs are most likely to die from a rattlesnake bite 6 to 48 hours after the bite occurs.

More on what to do and what not to do

Sometimes the snake does not inject venom

Twenty-five to thirty percent of all snake bites are dry, meaning the snake injected no venom.

Sometimes it’s hard to tell if your dog was bitten by the snake or not. Check your dog’s front legs and head carefully for any punctures. Symptoms of rattlesnake bites include swelling, slight bleeding, sensitivity, shaking and anxiety.

Rattlesnakes have a “rattle” at the end of their tails. They use the “rattle” to warn predators. As a group, rattlesnakes include 36 species and between 65 and 70 subspecies, according to wikipedia.

Rattlesnakes are native to North and South America and range from southern Alberta, Saskatchewan and British Columbia to central Argentina, wikipedia says. Most rattlesnakes live in the American Southwest and Mexico. Texas and Arizona are home to the most types of rattlesnakes.

Rattlesnakes hunt small animals such as birds and rodents. Humans kill large numbers of rattlesnakes, making them threatened in some areas, according to Wikipedia.

Rattlesnake bites are serious and life-threatening, and treatment is expensive.

This is why snake avoidance training for dogs can give dog owners peace of mind. It can help to protect your dog from a dangerous, painful, life-threatening situation.

Do you and your dog live in rattlesnake territory?

In the comments, let us know how you keep your dog safe from rattlesnakes. 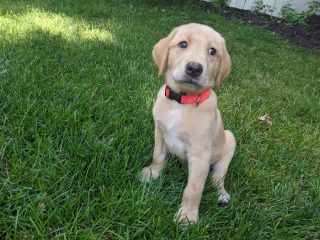 Previous
How to Choose a Dog Breeder in 2021 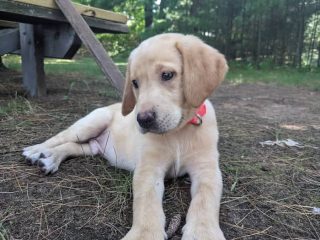 This is really important information for dog owners to have ready access to. I'm going to file it away for future reference, though hopefully I'll never need it. I was surprised about the no ice. Rattlesnake avoidance training sounds like a good idea, but pretty sure most of us aren't likely to do it.

And gosh, that poor pooch in the photo.