Housetraining a puppy is one of the main concerns of new dog owners and one of the very first things we teach our dogs.

A pup will have very few accidents and can be fully housetrained within a few weeks if trained correctly. If trained incorrectly, we make the housetraining process last months or years. In the worst cases, we unintentionally train our dogs to pee in the house, in their kennels or even on themselves.

Potty training a puppy can be overwhelming for someone who wants to do it right but does not have experience with a dog. Everyone has their own method of potty training, and unfortunately people still use old school techniques such as hitting the pup with a newspaper or rubbing her nose in her own poop. Lovely.

1. Adopt a puppy or adult dog when you have time to train it.

When I adopted my mutt Ace, I knew I did not have time to properly housetrain a puppy. That’s why I adopted an adult, housebroken dog. This might be a good idea for you too if you work long hours or can’t take some time off when you first adopt your puppy. It will take a few weeks to fully housetrain a puppy, and that’s being optimistic.

A dog left unsupervised in a new area will pick up bad habits. If no one is there to show the dog how to act, she will do whatever makes sense for her at the time. At the very least, you should be able to run home during your lunch break and also hire someone to let the dog out twice a day while you are gone during those first few weeks. 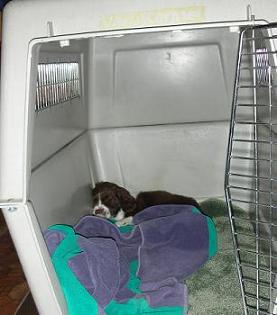 2. Use a dog kennel for puppy potty training.

A kennel works extremely well for housebreaking. A puppy will not want to go to the bathroom where she sleeps. It’s possible to have a puppy that never has an accident in the house if you use the kennel method and supervise the pup at all times when she’s out of the kennel. I believe in kennel training a dog 100 percent and will never housetrain a puppy any other way. The only exception would be an adult dog that has some kind of irrational fear of being crated.

It works this way: Crate the dog whenever you can’t supervise her such as at night or when you are not home. Take the pup outside right after she gets out of her kennel and she is almost guaranteed to go.

Unfortunately, I have seen a case where puppies were left in their crates for up to 14 hours at a time. This owner unintentionally trained her puppies not to care if they went to the bathroom in their kennels, on their own beds or on themselves.

I expect this owner to eventually give up on her dogs, and if the dogs are lucky enough to get new owners, that person is going to have a terrible time re-training them. No dog naturally wants to pee where she sleeps, so this is a very sad situation.

That way the pup has a word associated with the action and knows what to do. With Ace, I use the phrase “Hurry up.” He pees on command. 🙂

4. Ignore the mistakes and reward what she does right.

Positive reinforcement training is used by dog trainer Paul Owens and many others. It works wonders during housebreaking. If you catch the puppy squatting inside, pick her up and plop her down outside. If she goes to the bathroom outside, give her lots of praise.

If your dog pees outside, give her something she loves like a jerky treat. Be very generous with the praise and rewards when she goes where you want her to go.

6. Keep your dog leashed or near you at all times.

When you are in the house and your pup is not in her kennel, keep her on the leash. That way if she goes to the bathroom in the house, at least you can catch her in the act. She’ll be near you at all times and it will be more obvious to you when she shows signs that she needs to go.

7. Watch for circling, nose to the ground and squatting!

Once you see this behavior a few times, you’ll know when it’s time to hurry outside. Learn to predict these behaviors so you can bring your pup into the yard before she has a chance to go inside.

8. Keep your dog on a routine.

Let the pup out a few minutes after she eats. Let her out after she wakes up. Let her out when she comes out of the crate. Let her out every time you come home, etc. Don’t give her a chance to screw up! Basically, take your puppy outside every hour at first.

9. Take your pup to the same area every time.

I recommend using an area right by your door where it’s most convenient to bring your dog. Keep her on the leash so she can’t run off and play. Bring her to the same spot every time and she will realize what she is supposed to do.

10. Don’t play outside until the dog has relieved herself.

Play in different areas than where the pup goes to the bathroom so she can associate going to the bathroom in one spot and playing in another. She’ll probably want to play as soon as she gets outside, but make sure she “does her business” first. That’s why you took a trip outside.

Things not to do when potty training a puppy: 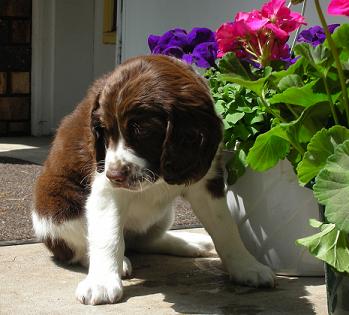 Your pup will have accidents. Multiple accidents. But an adult dog might have accidents too, especially if the dog was never properly housetrained in her previous home. Yelling will just scare the dog or make her more nervous. A nervous dog will have more accidents.

One of my adult foster dogs had an accident in the house. Instead of yelling at her, I realized I should have taken her out more often because she was confused about where to go in a new environment.

Come on! This is abusive, and the dog will have no idea why you’re doing it.

The only time to tell the dog no is when you catch her in the act. Even then, I wouldn’t make a big deal out of her mistake. Just quickly hurry her outside and make sure to watch her better from then on.

If you yell at your dog even seconds after she relieves herself indoors, she will have no idea why you’re yelling at her. She might appear to “feel guilty,” but that’s because she knows you’re upset.

4. Believe your dog is trying to get back at you.

That is giving your dog way too much credit. Don’t humanize your dog. She is not peeing on your rug or in your bed or on your shoes to get back at you for anything. She’s doing it because she’s a puppy and either could not hold it or is still learning.

5. Use puppy pads, indoor grass for dogs or any other indoor bathroom.

Puppy pads and other products create an unnecessary step in house training. They create more confusion for the dog, and many dogs will think it’s OK to pee on pillows, rugs or blankets because they are similar to puppy pads. Don’t even use newspapers for an indoor dog bathroom.

The only exception might be if you are trying to housetrain a puppy while living in certain apartments. If it’s not possible to be running outside often and quickly from your 12th floor apartment, puppy pads might be your only option. This would be reason enough for me to adopt an adult, housetrained dog.

6. Expect the dog to be perfect.

There is no perfect dog, and most dogs will have accidents.

Even a potty trained adult dog might have an accident in the house just because she is in a new area and confused about where to go. But some adult dogs were never housebroken and you will be the one to train them. It will be harder to train an adult dog than a puppy, but you can use the same steps.

A rolled up newspaper? Really? Hitting your dog cause her to be scared of you, to run from you or to feel confused.

9. Expect your dog to hold it longer than physically possible.

If I were locked in a small area and had to go to the bathroom, eventually I would go. Don’t have unfair expectations for your dog. Puppies can’t hold it for more than a few hours. There is also a small percentage of dogs that have medical issues causing them to urinate more often than the average dog.

I hardly ever put Ace in his kennel. He is fully housebroken and doesn’t get into trouble when left alone. He has free range of the house when I’m gone, even if it’s all day.

Would we have gotten to this point without a kennel? Probably. But I like to look at a kennel as a tool for future freedom. Because Ace stayed in his kennel whenever I left for the first few months, he did not pick up any bad habits and today he has freedom and trust.

Ace did not learn to chew my things or to get away with peeing in the house. Instead he learned to appreciate some down time while feeling secure and knowing I would return.

It’s been a very long time since I potty trained a puppy. Do you have any other suggestions?

39 thoughts on “How to potty train a puppy – dog housetraining”