I think we could do a little better conveying that message.

For example, let’s stop with the memes floating around that compare pitbulls to dangerous and violent things. Let’s stop telling people what is “more dangerous than a pitbull.” How is that helping the dogs? It’s just making them sound scary to people who truly don’t understand dogs.

It’s time to re-consider the overall message, and what we’re really saying. 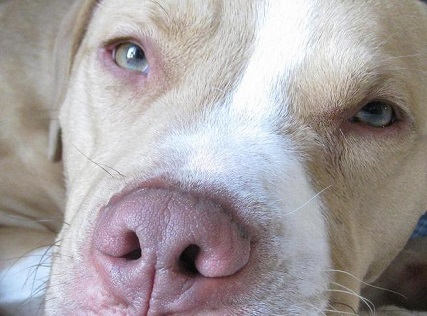 You told me through That Mutt’s Facebook page that pitbull awareness is still necessary, and you’re right.

This is all true. I can’t argue these sad realities.

But here’s a hard question:

Are you ready to view pitbulls as just dogs?

Could we even consider dropping the term “pitties”?

If we truly want to help get more pitbulls adopted, I think it’s important that we begin viewing them as just dogs. We want everyone else to start viewing them as “just dogs,” so it’s time for us to do the same.

If I honestly look at myself, I know with certainty one of the reasons I love pitbulls is because for years I saw them as “needing someone.” Needing me. Isn’t that what draws a lot of us to dogs in general? Isn’t that why some of us adopt and foster dogs?

The thought of rescuing a pitbull makes me feel good because I would be taking in a dog “no one” wants.

But do you see where that thought process is wrong? Those of us who love them the most are often the ones spreading pitbull myths.

Pitbulls are among the most popular dogs in America! They’re far from “unwanted.” Yes, of course there are still people who need plenty of awareness. But in general, people love pitbulls. We’re holding the dogs back if we pretend otherwise.

The Animal Rescue League of Iowa has recently made the decision to phase out its “pitbull” specific programs in order to include pitbulls within the larger group of “dogs,” according to a blog post featured on Animal Farm Foundation’s web site, a group with the mission to secure equal treatment for pitbulls.

There is a time for pitbull awareness programs, and Des Moines needed it very badly three years ago, according to the post. That’s why Animal Rescue League created its “Pit Crew” breed ambassador program at the time. Since then, the group has made a huge difference as far as showing people that pitbulls are normal dogs.

But now Animal Rescue League says it’s time to move forward and stop separating the pitbulls from other dogs.

The group is choosing the latter – to include its “pitbull programs” within its overall “dog programs.” Nothing is changing except how the pitbulls are branded. 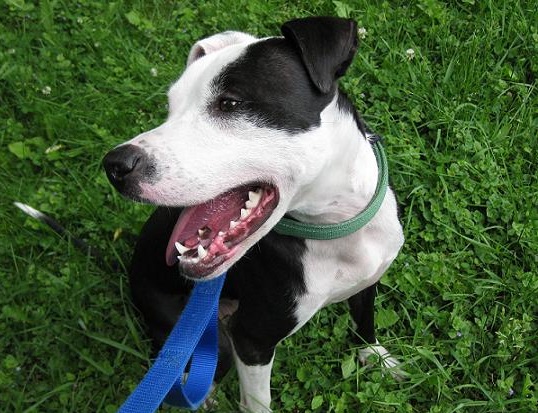 Of course, this doesn’t mean every city is ready to stop its pitbull ambassador programs. Some areas are currently in desperate need of starting pitbull awareness, just as Des Moines needed to do three years ago.

“Ambassador programs are a tool to help start adopting out dogs,” according to Animal Farm Foundation. “But beyond that, the programs can have unintended consequences that make ‘pit bull’ dogs seem different and undesirable or scary, which means the window for having such programs needs to be temporary.”

I couldn’t agree more, but I’d also like to know what you think.

We can’t get stuck in separating out the pitbulls, right? At some point, we need to move forward.

We want politicians to stop viewing pitbulls as different than other dogs.

We want landlords and dog daycare owners to stop viewing them as different than other dogs.

We want the general public to stop viewing them as different than other dogs.

Are we willing to do the same?

What do you think? Is pitbull awareness still necessary? What should the message be?

I would love it if the question was (for example) "what is your dog like?" at the care facility or "what is this dog like?" at the shelter instead of "what breed is it" like others have mentioned. But reading local news website comments, even in a "progressive" area like the SF Bay Area, breed specific education is sorely needed (thanks, media). Or... breed stereotype education. Maybe this comes in the form of dog behavior education (for example, to journalists and the authorities so they don't rush to the gun holster) that tosses away the labels. Maybe the education starts with addressing labels and moves the conversation towards breed agnostic behavior education. I'm a fan of whatever reaches the most ear-holes :)

You raise the perfect questions, indeed.

Yes, I know what you mean about breed-specific education still being necessary. I feel overwhelmed by it usually. It's hard to know where to even start.

I think we definitely still need pit bull awareness and dog awareness in general. I have 2 children and we adopted two pit bulls over a year ago. I researched all breeds before coming to the conclusion the family loyalty was exactly what we were looking for.

There has been obstacles along the way some are/were a neighbor who tells his kids to stay away because "pit bulls BITE". (i just think to myself..really...if that were the case i wouldnt have them...) At obedience training we had them singled out because they are pit bulls and had to muzzle them for no reason, I get the look of "Oh My" when asked the breed of them, etc... However I think the biggest obstacle as a dog owner(any breed) has been toys, carpeting, even the walls getting chewed up..lol..not the breed :)

Also to many pet owners their dog is a "regular dog" we love them for their uniqueness and brag to others about how wonderful they are and why. All dogs are different even ones of the same breed, just like people are all different. I often refer to my dogs as pitties, but not for the fact they are "needy" because they are not. I see them as strong and courageous. They have been therapeutic for both my kids, but especially my son, who is a special needs child. I am thankful for the dogs I have and that there was no specific ban on them in my neighborhood :)

Aww, thanks so much for joining the discussion on this. I don't have a pitbull, so I appreciate hearing from people who do live with them. How sad that people make so many assumptions based on appearance.

As much as I would love to not have to have pit bull awareness month because of the great reasons mentioned above, I feel it is still necessary. As I have stated in the other post I have owned at least one pit bull for over a decade. From the time I got my wonderful girl Parker I had to defend my dog from all sorts of stereotypes. I had her before my children and she did fantastic with them. She slept with my daughter chloe every night until we ultimatly lost her to brain cancer. She went camping with us, lived with several other dogs and cats, and never once did I ever feel she would hurt a person. Currently I foster another pbt. Our rescue pulled him from a humane society in Kentucky. He was around three months at the time, he's now nine months. I've fostered 2 dogs at a time and have 3 dogs and 3 cats of my own. I've had many a foster come and go but not him yet. He has had adopters but ones landlord told them they'd need "hazardous dog insurance" UGH! Pts are one of the top "breeds" euthanized in shelters. Maybe focusing on some of the great things these dogs are and have done is the best way to have pit bull awareness month. For example start showing more of their rescue work. Sgt stubby (to my knowledge) is the most highly decorated war dog and he was a stray pbt. Helen Keller owned a pbt. These dogs used to be known as nanny dogs because of how great they can be with children. Until the media starts showing these dogs in a better light I feel we still need awareness month.

Yes, I think you make a lot of great points. Showing them in a positive way is always a great idea. It's so unfortunate that so many insurance companies and landlords still have issues with certain types of dogs.

And I didn't know Helen Keller had a pitbull! :)

So glad you agree.

I met a guy at the Responsible Pet Owner's Day event held here in Lawrence, KS and he introduced his dog as a Staffie mix. I loved that! He pointed out to me that pitbull is not a breed, it is a label that covers a variety of dog breeds used for pit fighting. How about we call the dogs Staffordshire Terrier mixes or Staffie mixes instead?

I can't speak for others, but for me it's important to teach people that "pitbull" is not a bad word. So I like to continue using the pitbull label.

On the other hand, I know lots of shelters will label mixed breed dogs as boxer mixes or Staffie mixes or terrier mixes just to avoid the "pitbull" label because unfortunately dogs labeled as "pitbulls" might not get adopted as quickly if the adopters could face discrimination from a landlord or insurance provider, etc.

It's a tough topic.