Home » How no-kill shelters save more dogs and cats

The United States currently kills about 3 million healthy dogs and cats in U.S. shelters annually. That’s the general agreed-upon number from the Humane Society of the United States and other groups.

We can definitely find homes for an extra 3 million animals each year if we work together. Sure, some areas are slower to catch on and some face difficult challenges, but we’ll all get there eventually.

There are currently 144 documented no-kill communities in the United States, according to Out the Front Door, a web site that tracks and verifies this info.

To be considered “no kill,” the community must have a live release rate of 90 percent or more for impounded dogs and cats. This leaves a reasonable leeway for animals that are truly suffering and should be euthanized and for a few dogs that are truly dangerous and should be killed for safety reasons.

I reached out to shelter workers from these documented no-kill communities and asked them about some of the basic ideas they follow to save more lives.

Here’s what they had to say: 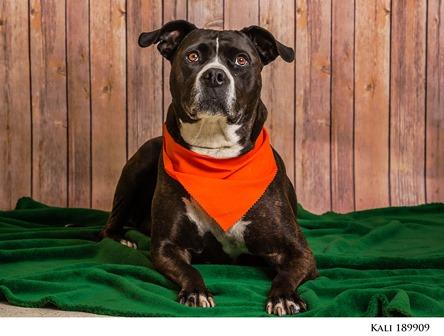 *The dog pictured above, Kali, is up for adoption with the Nevada Humane Society

The Nevada Humane Society is an open-admission, no-kill shelter located in Reno. It takes in owner surrendered animals as well as strays, according to its web site.

I spoke by email with Kimberly Chandler Wade, senior manager of communications and events for the shelter. She shared all sorts of ideas the NHS uses, and much of it came down to getting more people to the shelter by offering adoption specials.

NHS increases its adoptions by getting creative and offering adoption promotions, Wade said.

As another example, the shelter featured an “Orange is the New Bark” adoption special this month after the series “Orange is the New Black” (one of my favorites!). People could adopt a dog wearing an orange bandana for just $25, and all black cats and kittens were just $10.

“The goal is to get people into the shelter and thinking of us when they consider bringing a pet into their family,” Wade said. “The adoption campaigns are key to that.”

The shelter is also able to do more adoptions because it remains open on weekends and in the evenings and even on some holidays.

The organization took in 8,179 dogs and cats in 2013, according to Out the Front Door. It had a live release rate of 92% (or 88% when factoring in owner-requested euthanasia).

Before KC Pet Project took over the shelter, the shelter had a live release rate between 31 and 61 percent over the previous 5 years, according to its web site.

I spoke with Tori Fugate, the manager of marketing and development for KC Pet Project, over the phone. She shared some of the programs that work really well in Kansas City.

One of the reasons the KCPP is able to save more animals is because it offers “open adoptions,” Fugate said. Instead of looking for reasons to turn adopters away, the shelter has conversations with adopters to match them up with the right pets.

Personally, I’m starting to see a trend! Thankfully, more and more shelters are dropping invasive adoption requirements. I can’t wait for more and shelters to catch on!

Another great program through KC Pet Project is that it offers playgroups for the dogs every single day, Fugate said. This is one way to relieve stress for the dogs while offering them a way to play, exercise and socialize.

It also helps the staff and volunteers get to know each dog’s personality and playing style, which helps them match the dogs with the most appropriate adopters, Fugate said.

Check out this great video from KCPP to get a better idea at the amazing work it is doing.

Other ways the NHS and KC Pet Project are saving lives:

Other examples of U.S. no-kill communities

No-kill communities exist in all areas of the country. They exist in rural and urban areas and are not limited to areas that have “more money.”

As you can see from the KC Pet Project video, it’s about removing killing as an option and getting creative, because people really are very resourceful!

You have to be “really brave,” Fugate said. You must “have a passion to save as many lives as you can.”

Here are just a few examples of additional no-kill communities in the United States from the growing list of 144 existing communities so far:

To see the full list, visit Out the Front Door.

What are some programs that are working really well in your community?

WELL DONE WE NEED MORE INFO ON NO KILL SHELTERS I JUST ADOPTED A PIT BULL FROM BKLYN ACC,THEY ARE A GREAT BUNCH OF PEOPLE HELP ING ANIMALS IN BROOKLYN ,WE LOVE OUR NEW DOG HATTIE JONES THANKS BKLYN ACC.

So glad to hear you recently adopted a dog. Also great to hear there is good work being done in Brooklyn. I highly suggest the No Kill Advocacy Center for more resources. Here is another post I wrote about the topic: http://www.thatmutt.com/2012/04/10/how-can-my-city-become-no-kill/

The Utah Humane Society here in the Salt Lake Area has been no-kill for dogs for several years. They recently opened Cat City, with rooms filled with climbing structures and resting spaces where groups of cats can be in more natural home situations. They are hoping this will allow them to be a no-kill cat shelter. They have foster homes for kittens, puppies and older animals who do not respond well to the shelter. They have an electronic sign on the freeway, allowing them to spotlight animals and special programs. Their clinic offers affordable innoculations and neutering. This is a great shelter where our extended family looks for new members of our family.

So glad to hear they are thinking of ways to save more cats.

Funny, I used to live in the KC area and never heard of the KC pet project. How could I miss it? BTW, I love the pet shaming idea and the orange is the new bark.

Great post Lindsay. I love seeing shelters really working the system to get their pets adopted. Wish all shelters were that ingenious!