Home » Dog training: Stop my dog’s excitement around other dogs

My dog Ace is a friendly Lab mix, but when we see other dogs around our apartment complex, he pulls towards them – tail wagging – trying to get close for a sniff.

No one seems to care about this other than me.

The other dogs are mostly friendly, and Ace is not scary to most people. He doesn’t bark or lunge.

It’s just that I don’t want my dog to pull.

He walks at a perfect heel when there are no other dogs around.

I want to get back to the point where he heels perfectly even as we pass other dogs.

So, how do I get my dog to ignore other dogs? 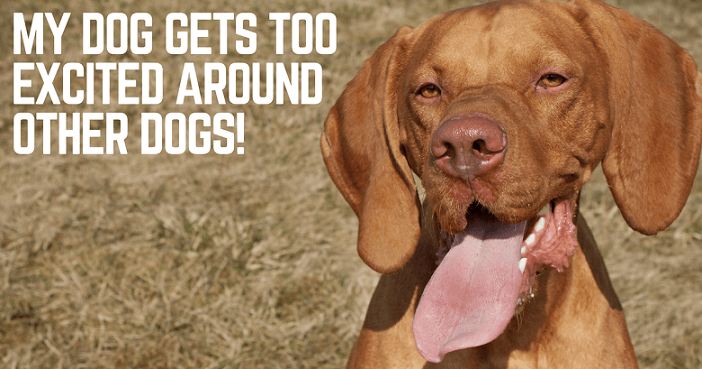 1. I need to be consistent.

I’ve allowed Ace to “say hi” to so many dogs that it’s worth it to him to pull because he’s rewarded for it at least a third of the time. He’s either ignoring me or he’s learned that “heel” doesn’t apply when other dogs are around because I haven’t done a good job of enforcing “heel” in that context. If Ace sees another dog he pretty much automatically pulls towards the dog or at least stares at it and wags his tail.

2. I need to stop worrying what others think.

I’m not sure when I became such a softie, but lately I’ve been worried about looking “mean” for not allowing my dog to sniff other dogs.

Time to get over that! 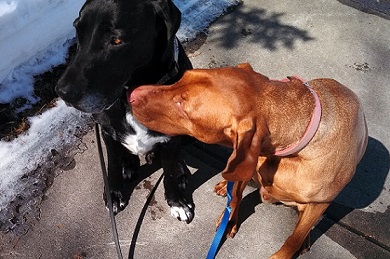 Who cares what other dog owners think? When I tell my dog to “heel” or “sit” or “watch,” he needs to listen and not ignore me. I need to make a point to set him up for success and not failure. I need to be more interesting than the approaching dog! Plus, I need to have a consistent, default behavior for us both to follow so it becomes Ace’s habit vs. pulling up to the other dog.

3. Use a training collar.

I’ve been using a nylon, buckle collar with Ace 99 percent of the time lately because he truly is really good most of the time. And even when he’s not, I can hold him back. It’s just that I shouldn’t have to hold him back. He should know how to behave!

So, I’m going to go back to using a training collar. I have a Gentle Leader, a prong collar and a simple choke collar. They’re all effective, but I’m planning to stick with the light choke chain collar for this type of training. He wears it high on his neck, just under his jaw and behind his ears, which allows me to give a mild correction. And seriously, these “corrections” are so mild. It’s actually the sound of the chain slipping that he seems to respond to.

I’m a fan of the Gentle Leader, but I tend to use it as a crutch. A Gentle Leader prevents my dog from pulling, whether he’s paying attention to me or not. It doesn’t teach him not to pull. My dog and I work together and communicate much better when he wears the choke collar vs. the Gentle Leader. This won’t be the case for all dogs, but it’s true for Ace and I.

4. Bring out the treats!

I usually don’t bring treats on walks because I’d rather not fumble around with them. But if I want to teach my dog a new behavior and reward him for it, I’m going to have to start carrying treats on all our walks. I plan to cut back on his meals and use some of the kibble as treats, but I’ll also mix in more tempting goodies like bacon or smelly jerky treats. He’s easily motivated by food, but I do have to hold the food right up to his nose to get his attention away from other dogs.

Doing a “u-turn” on a walk is my default move if I need to block my dog from something. Usually I turn right into him so he either moves with me or I physically move him by bumping right into him. We practiced this move all the time in obedience classes. Some handlers use a command for it like “swing.” I usually just say “heel” as a reminder to pay attention.

I plan to do lots of u-turns for the time being, followed by the “watch” command where my dog is rewarded with food for making eye contact with me. This will be easy since he already knows all this. We just haven’t practiced it in this context for a long time.

6. Eventually work on walking closer to other dogs.

After a week or so, I plan to work on passing other dogs again but using “watch” so Ace is rewarded for looking at me instead of pulling towards the dog. I’ll probably give the oncoming dog a lot of space at first, stepping to the side and eventually working closer and closer. My dog did this perfectly in indoor obedience classes. He’s definitely capable of ignoring other dogs. It’s just that I have not been enforcing the behavior I want in “real life” scenarios for too long.

7. The hardest part – Waiting for permission before greeting other dogs.

You know that part in the Canine Good Citizen test where the dog has to “sit” calmly while greeting a friendly stranger with another dog? Yeah, almost impossible for my dog in real life right now. But I’d like to get back into that habit. If we see another dog and the other owner and I agree it’s OK for the dogs to meet, I want my dog to sit calmly at my side first and wait for a verbal “OK.”

Will we get to that point? Honestly probably not, but I’d like to consider making that a goal. My dog could do this in obedience class and during the CGC test, but I don’t think he’s ever done it “out on the street.”

What tips do you have for getting a dog to ignore other dogs?

It’s always a work in progress, isn’t it?

Ugh. Baron is the WORST at greeting other dogs. Unfortunately, his excitedness is accompanied by barking, which does sound intimidating, and makes others wary of him :( poor boy just wants to make friends! The other difficult part is that when another dog is present, he couldn't care less about even the most yummy treats! I'll put it right in front of his nose, and even put myself between him and the other dog (usually across the street, etc), and he is still so worked up that he won't look at me. Ugh. its quite the struggle.

This is still a pretty constant struggle for us, especially if my wife has the leash. The big thing I found that helps is I do a quick leash pop to distract (or worse case scenario the Cesar off heel nudge)....followed up by picking up the pace and focusing past the other dog. Followed up by praise and maybe a reward if he stays focused ahead vs. obsessing about the other dog.

If I am trying to greet another dog owner, and their dog we try really hard not to approach head on. We try and veer in at an arc so as to reduce the dog starring straight at the other dog.

Yes, I do all of those things as well.

Maya has been very challenging in this area. I'm actually having an easier time with Pierson's dog aggression and leash reactive behavior. He is easier to distract with treats so long as the other dog isn't reacting too. With Maya, she has no interest in treats when she sees another dog... and isn't fazed by any sort of collar. #7 is definitely the hardest part for Maya. Once her happy switch is flipped on, it takes a few minutes to wear off. She is getting better, though. Slowly but surely, and consistently, we'll get there.

My 1 yr old american staffordshire terrier/boxer sounds just like Ace. I use the prong collar with him. He will go into a sit-stay if a dog or person passes by but he still tries to sniff. People have asked me why I don't let him sniff other dogs and I respond by saying "He is only allowed to if I say ok and the other owner says it's allowed." Our other dog is an poodle/bichon frise that just happens to be on probation. It's weird because people expect the pit to be agressive but no its the poodle.

I find that Ace does better if we just keep walking vs. the stop and sit. Although, it would still be a good challenge for him to be able to sit and stay as others pass. I should really work on that again too.

I love this post because your description of Ace's reaction sounds exactly like Baxter's. Since before we got Bax, the CGC has kind of been an unspoken goal of mine, but I really have no idea how to attain it, especially with his reaction to other dogs. I've tried the U-turn in the past, but it's nearly impossible to get him to break his focus on meeting the other dog. He just stands there and then I end up in the even more embarrassing/unkind situation of dragging him around by the collar. I think a big part of our issue is that he doesn't have occasion to meet a lot of other dogs because we live in such a rural area. There's not a big dog walking culture here. When we go out, it's to the dog park or a regular park, where it's a very different scenario than walking down the road.